That’s what it says in the Kim Wu blog. Are they not included with the ultra edition like Seasons past? @rukizzel

All that means is that if you don’t buy them via Ultra edition you need to purchase them separately with gold. Premium sets have always cost extra outside of the Ultra editions, it just seems like now you need gold to buy them instead of outright with cash.

I want to know that too

All that means is that if you don’t buy them via Ultra edition you need to purchase them separately with gold. Premium sets have always cost extra outside of the Ultra editions, it just seems like now you need gold to buy them instead of outright with cash.

Can you play as the character and eventually unlock the premium accessories?

Thanks for clearing that up.

I mean as long as we still get them free via KI Gold, then fine, but still odd and needs clarification.

From the front page:

The accessories come with the Ultra edition. They simply can’t be unlocked via XP if you purcahase the Combo Breaker pack or individual characters. They’ve hinted that there will be other options for which we can use KI Gold in the future, from what I’ve read.

It says the KI Gold is for a limited time only. Explain that?

Pre-Order bonus. The amount of KI Gold will supposedly be reduced for those who buy it after the pre-order deadline.

As mentioned in Rash’s post, there are accessories that are Premium, and Kim Wu’s “Seoul” set are indeed Premium, as well. You must purchase those accessories using KI Gold.

If they came with ultra, wouldn’t he say? That sounds pretty definite. I think we need some clarification. @rukizz3l are you saying those Premium accessories DO NOT come with ultra?

Sorry - this was written before Ultra Edition preorders & details were announced, thus the broad wording. Ultra gets the Premium accessories like it has before.

So they come with the Ultra, right? I never purchased that edition before.

I’m not sure if you’re new to the concept of KI Gold but just in case, your post implied that KI Gold is free (out at jest that’s what I understood).

Keep in mind KI Gold is KI’s currency and can only be acquired by spending real money (Except where it’s given to you such as with S3 Ultra edition preorder).

So if you don’t buy the Ultra edition, you don’t get the premium accessories. Later on you decide you want them, you’ll need to convert your money into KI Gold and buy them.

XP grinding does not provide any KI Gold.

Cheers for the clarity.

I hate to be that guy but that means Ultra also includes Retro Premiums like before, yes?

Guys I preordered do feel free to ask any of us who did preorder any questions on 3/29.

I may even start streaming for those who want to check out how the level 4 Enders appear day one.

I’m ready for ANY surprises.
I’d BETTER keep my KI gold from purchasing Shadow Jago so I might not grind Kim for her colors, at least want the black hair color and Xtreme boots and god knows what sexy outfits Tusk will have. Also might have to cop Toad 'em outfit and groovy Afro for rash. That’s pending if Orchid gets anything new to buy … 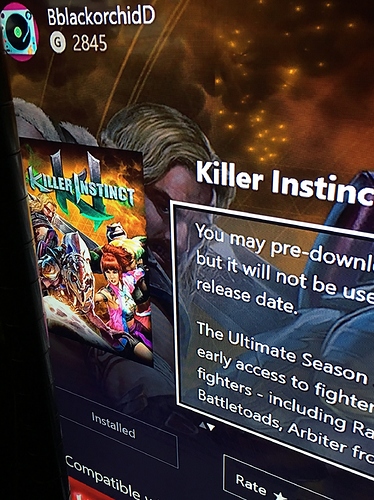