Curious to see who from the KI community owns and plays Rainbow Six Siege on their Xbox One. I have had it since Christmastime and have played enough to unlock all the Operators, but I have been playing without dedicated teammates, which also results in a lot of teamkilling or early quitting from randoms.

Last night I played a few matches with @TheNinjaOstrich and @GodtierMacho, and the game takes on an entirely different aspect when you have people you can actually communicate with and rely on.

If there are enough of us, maybe we can have our own small sub-community and get full 5-person-teams running when people are available. If we have a full ten we could play custom matches against each other too.

If you haven’t played it, it’s a great game and you owe it to yourself to check it out, even if it’s just watching some Twitch streamers or youtube videos of it for a bit.

I actually purchased it when it was on sale through the online store recently. I had fun with Vegas 2 so I figured I’d give this a shot. I’d be happy to mooch off good players for wins.

Yeah I bought it during the sale too but I played the beta. This game is pretty un and it would be awesome to get some KI folk together to play this game.

Had a lot of fun playing Siege with @TheNinjaOstrich, @BubbRubb4Real, and @GodtierMacho last night. I think with a little more practice playing together we have the makings of a solid group.

I’m still struggling to get used to playing in coordination with you guys, as opposed to playing whatever way feels right at the time. I’ve been playing this game lone wolf with randoms for too long!

I just suck at this game. Lol.

You just need to get used to the situational awareness R6S requires, since you can knock holes in nearly anything. You had some good plays last night, but you also had a few moments where you didn’t double-check a window or hole in the wall which resulted in you getting shot.

It just comes with time, and I still need to remind myself about it when I haven’t played the game for a week or so.

Likewise bud. Had lots of fun despite me becoming a Mt Everest of Salt by the end. Lol.

Just wanting to give a heads up to anyone here that is interested. The new patch that includes the new zombies mode comes out tomorrow and it looks pretty fun. I know not many people on here play this but for anyone else who is interested I’ll be on tomorrow if you would like to join.

Edit: Tagging people that I’ve played with in the past and others who expressed interest in the other thread.

I’ll have to check it out at some point! I’ve been a bit busy with other games lately but Siege is still one of my favorites.

Pulled this from one of the four Outbreak Packs the game gave me when I logged in. Looks like I need to play Ash more… 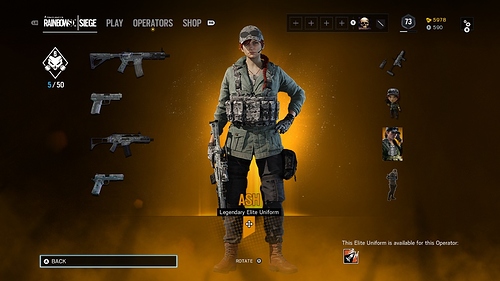 Actually I think they have everyone the Ash Elite skin for free. I can’t think of the reason why off the top of my head but it was because Ubisoft messed up on something I think.

I have two Ash legendary skins now; looks like the Sidewinder skin was given to everyone. The one I pulled from the pack is a special one!

Nice! I bought some outbreak packs recently and got some nifty stuff from it. My Smoke looks sick now with the Outbreak headgear.

With Grim Sky having released, are any of you still playing, or still interested in playing as a group, Siege? I’ve been watching tournament gameplay recently, and I’m looking to start playing more often. It would be a lot of fun to play together, if you’re interested!

I’m still playing if you ever catch me online.

How do you feel the game plays currently? I’m needing to do some work to get back in gear, especially learning all the new operators and changes, but I’ve also been watching tournaments when I can.

I feel like it still plays very well. They made adjustments to the sights when aiming down sight (ADS) to improve accuracy which is nice. The game still has the issues with player’s with higher ping getting an advantage when peaking but I have a hard time figuring what Ubisoft can do about that.

They’ve made several adjustments to operators since the last time you played. If we can arrange a time to get on I wouldn’t mind forming a custom game and we can just go over any questions you have and maybe explain what the new operators can do.