B) Another thing: Can they be seeying something faster than me? Because sometimes I get broken without even seeying the first blow animation. It could be a guess or…As I asked, may I be receiving the info later?

I’ve also experienced matches with less laggy slideshow matches (doesn’t mean there’s no rollback happening, because it is) against people with very good connections (I’m guessing this) against people who are very close to my country (like Chile and Brazil) where we can experience slow macthes. For instance, I know with some players from Chile, depending on their ISP we will have connection issues. No matter if they have a higher speed than mine, the connection is just not stable between us. But with some other players the matches seems fine and playable (though you can mess the breaking timing).

C) The ISP stability in their service may have a lot to do.

D) How does the netcode works between connection that are a very long distance away?

I’ve also played a very good player from the US and he told me my connection was better that other player who was also far away in EU (I always expect EU to have better connections, but it seems it’s not in the whole Continent. Also, the distance is really big so I expect to have lag issues with EU)

So yeah, lag is a problem, a reality considering we are far. Sadly in my country we don’t have the connections Japanese have, if we would then the matches would run even smoother.
I’m still amazed on how good the netcode is. I remember fighting PR Rog and he didn’t say anything about lag…and you don’t have flags like in SFV that tell where you are from.

I am amateur at best, in regards to the functional technology of KI’s netcode and rollback netcode in general. But I will share with you my understanding and others will jump in and correct me.

First, lag affects both players in KI. Actually most games whether they use rollback (generally considered the best method) or input delay to handle latency (more or less “lag”) affect both players. It’s only SFV which somehow drops the entirety of the latency on one player. In many games with a “host” whoever is hosting has little or no lag but for KI it establishes peer to peer connections so there is no host per se.

This doesn’t mean that you see exactly the same thing as your opponent, though, just because you both have experience similar latency. My understanding of rollback is that it predicts what you will do and allows each player to input in close to real time. If and when a prediction turns out to be untrue, it “rolls back” and re-calculates what just happened. It sounds impossible but if you think about how many frames are inevitable compared to frames when you enter an input then you can see how this is possible. A throw input leads to twelve frames of inevitable action, and it is reasonably fast. A DP or a heavy kick lead to lots of inevitable frames. This is often seamless but in bad connections can produce some truly bizarre things - including the “broken before I even see the first frame” scenario you describe.

As far as the quality of the connection, this is the magic of the Internet. The physical distance between you and your opponent is almost immaterial. What matters is how many connections the data packet has to make in between the two of you and if those connections are busy or not. So, you may connect to your ISP, who has high bandwidth to a big urban center (BA for example) which in turn has a big bandwidth connection to the USA. In which case you might experience a very decent connection to someone in the US. While your connection to Chile may go through many more nodes along the way, each of which has a lower bandwidth and is crowded, causing a delay in the information getting to your opponent. The latency is not about the wire distance it’s about the routing.

As far as the EU, there is lots of great infrastructure in the EU but it varies greatly from place to place. Plus, many of those nodes may be crowded with traffic. Lots and lots of net traffic flows between servers in the EU and US. So while bandwidth is high, and connections in both ends might be very good, the data may have to flow through busy nodes along the way which slows it down.

One of the persistent myths about internet lag is that if you have a fast connection then the other guy’s lousy connection is what leads to lag. While it’s true that terrible connections will always have latency, individuals with great ISP service may still have lag because of the routing between them and their opponent. So it isn’t necessarily the other guys “garbage internet” causing the problem.

Wow, how the hell do you know all of that? lol
Its amazing when you think about it…all those millions of ppl all crowded on the network yet we can still play with someone on the opposite side of the planet in damn near real time.
It friggin magic dude… unbelievable sometimes.

Lol. Hopefully it’s accurate. I’ve just picked it up here and there along the way.

And yes, it’s magic. I never would have believed that we would get here. SF III Double Impact on Dreamcast had online play and it was nearly unplayable. I never figured it would get much better than that.

technology is so amazing when you really think about all the little details and how just 50 years ago these things were unimaginable! I mean the motor in your vehicle, a computer, your TV… all of that stuff is just amazing. Props to the people that invested the time and energy to make it all work for us.
We really do take these things for granted…I mean a fuckkking jumbo Airplane for Christ sake!

One of the persistent myths about internet lag is that if you have a fast connection then the other guy’s lousy connection is what leads to lag. While it’s true that terrible connections will always have latency, individuals with great ISP service may still have lag because of the routing between them and their opponent. So it isn’t necessarily the other guys “garbage internet” causing the problem.

This happens a lot in the Gears of War forums. It has become so toxic! The ppl that are considered laggers are bashed so hard when I don’t believe is 100% true. I have had the good connection side (close to the server) and it wasn’t that hard to kill a lagged person. Despite weird things happening I usually have the advantage considering movement, reaction time and all the strategies I can use to counter that person who is dealing with a lot of stuff (sticking to walls, shots not comming out of the weapon in time, etc). In short, I’ve experienced both positions and I’ll always will prefer having the advantage. Is fun how some are convinced that the person who is lagging has a lot of benefits. Of course there can be lag compensation, but this is something different.
I wish Gears had a better netcode, that works as great as KI.

I’ve been spending a lot of time on A380s lately. It’s an experience…

I wish Gears had a better netcode, that works as great as KI.

Gears, and other multiplayer shooters have a completely different problem. Because there are more than two players you can’t have a peer to peer connection so all the players are communicating with a single server, either a dedicated host or one of the players’ Xboxes serving as the host. This means everyone will, by definition, have their own unique latency. And all of my experience agrees with yours - that the guy who is lagging is toast, rather than having some sort of lag advantage.

Ill have to look that model up…Ive never heard of it. What’s special about it? 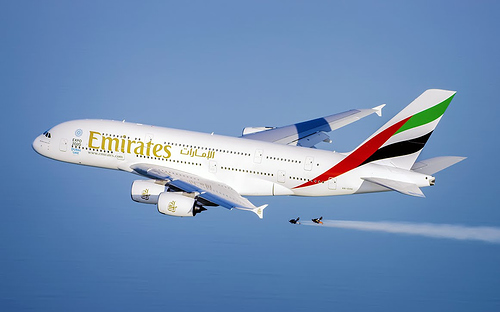 It’s double decker the entire length of the plane and holds 500+ people.

WOW!!! Look at those tiny little airplanes along side it! lol…thats insane!
Man now that I took a second look…thats kind of scary, 500 people + crew? Geez!

I think that’s a couple of skydivers in wingsuits, but the plane is bonkers big. It’s very impressive to watch them rolling around on the taxiway etc. Inside, it’s like any of the other big aircraft. The seats are 3-4-3 and there are four or so separate cabins on the lower deck. The front most cabin is weird because it goes up into the nose of the aircraft and there are steps up to the bathrooms, and the cockpit. And then a set of steps up to the second deck. Anyway, we may be a bit off topic, lol.