I don’t really see the point in rage quitting in KI and I believe Rage Quitters should be given a worse punishment than the innocent players. Why? Let’s say “you” start some Ranked matches online and come across a few rage quitters, all of a sudden you’re the one that gets the probation notice for disconnect wins and the rage quitters are left untouched.

Perhaps before the year is over, we could opt to ask the devs balance out the online justice system in KI. How?

My suggestion is when someone disconnects intentionally (not because of lag but because that person fears losing) they should be given a immediate time out of let’s say, 10 minutes. Repeated disconnects and the timer increases. Any more after that and that player should get banned by Xbox for 4 days.

Any thoughts to improve on this?

…and we may never know.

That is true. But the probation problem still remains for the winning player. I guess playing offline in tournaments would be one of the best routes to take. 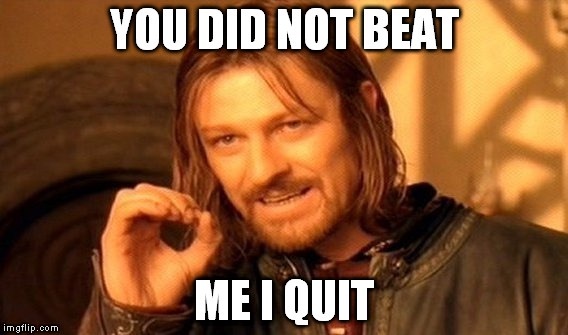 image.jpg568×335 46.8 KB
Why would i not be able to quit whenever i so choose? After all it is MY video game, and i see no reason to sit and watch shago or whomever perform crazy stunts,after a narrow win in the first place. Quitting has been suggested,in place of being able to beak ultra combos. Nothing makes you quit faster than a grueling triple double… Ughh
TheSkullAddict June 26, 2016, 11:51pm #8

The only downside to that is it shows your poor sportsmanship. You’re basically saying that you lost and will not like to lose like that ever again.

Look, my temporary insanity should show I’m all for good sportsmanship from both sides. I think a punishment of some sort should be in place as entering Ranked, at least, implies understanding that you are fighting for rank and points. Thus, you should be expected to be able to take crippling losses as well as easy wins (as far as extremes go).

That being said, I don’t think this should be implemented unless there is a way to check if they are rage quitting (such as manually selecting quit as opposed to disconnects being tracked) and not punishing people leaving after, say, the first complete ultra or so.

I haven’t seen a lot of rage quitters, but lately I have seen a weird situation where after being beaten badly the opponent will just not play. Like the second game in a match they’ll just sit there and let you beat them.

I think that needs to be dealt with it also. What’s the point of going idle if you’re in an online match? At least if you’re going to lose, at least try to mount a comeback.

If you quit out after an ultra has begun, it is not considered a RQ or disconnect. The game is over, and you are actually free to leave with no penalty. D/C’s only proc as such when the disconnect happens during a live match.

As to why the innocent get punished/warned about excessive D/C’s, I’m guessing it’s a technical issue. It’s probably not always easy to tell server-side just who was responsible for a particular disconnect.

That’s what I’ve been thinking on that. Although I guess I’ve been lucky with D/C’s thus far. I’ve only had, like, maybe four happen ever and as far as I know it wasn’t ever me lagging (perfectly stable all night before it) and I’ve never been counted with a loss or warning or anything.

Yeah, when I was grinding for the Top 32 star I had 10 matches that just lagged out before I hit the character select screen where I was credited the loss. But that was over the course of 300 games, so overall I think the system is pretty stable.

No only rage quit Need to be punish . Same jago cheater Need to be . Because its not Nice to receive 30 endokuken sinon one round

I do not know to much about it but at a guess i would assume for a multiplayer match you both have to connect to a server at the start and during the match and if one person disconnects to that server it can assume that was the rage quitter.

Thing i really do not get is that i thought this was fixed long ago i saw a panel where they talked about the Jail system and they had a way to find out who disconnected…then they dropped the jail system as there was no point with rage quitters being punished. But then this probation thing came which made no sense to me as it punished even the people who had people rage quit against them.