So who’s going to this tournament? It’ll be the first major of season 3 and a great venue to show off new tech. It starts on April 29th in the Seattle, WA area. I plan on going and playing the best I can with Aganos. Who else is going? It’ll be a great platform to showcase what makes this game great since it was absent entirely from this same tournament last year.

I’ll be attending this year. I am playing both Skullgirls and Killer Instinct and hopefully I can play a decent Hisako.

I’m potentially going to go. Might be on my own, but would definitely like to go back to Seattle and have some fun playing games and getting some of that authentic sushi. I’ve honestly never had some so good in the U.S. since going there.

Sounds awesome. We should grab some sushi and share Aganos tech over a couple of beers lol

I’ll be there as well as everyone else from the PNW Killer Instinct group. I know there’s going to be quite a few top level players there which is always exciting. Some of the SF5 pros are getting back into Killer Instinct as well. Plus tacos. 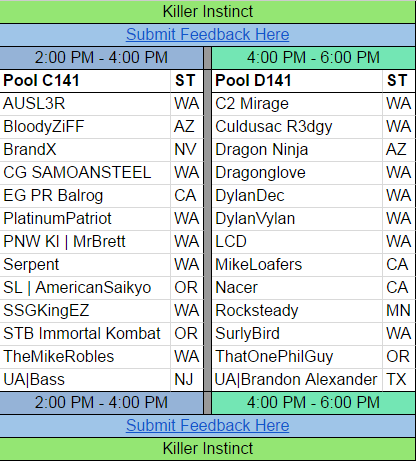 Pools for NWM. Man I am gonna get annihilated haha. I’m gonna have to put myself into overdrive for this.

does anyone have a link to a Twitch stream or a Youtube video for the KI top 8/top 16? I couldn’t find it on Khaos’ past broadcasts and Youtube is filled with SFV, now a little Tekken and MKX thrown in there.

He plays, he says he’s getting back into the groove of the game.

Nice. Hope he does well.