obviously we all can’t wait for the next new ki character but i am sick with the classic vampire monster ideas,how about a creepy porcelain doll…? it fits as he…l in ki and i am sure the artists and designers can manage to do something really interesting and unique. the possibilities are indeed endless .

While interesting, I don’t think it would be a very popular/supported idea (no offense) for a character. Also, a lot of the characters take inspiration from other sources, and IMO, there simply aren’t any real good sources to use for this concept (the only 1 I could think of is a “Chucky” doll kind of appearance) simply because the concept of the character itself is just way too specific - similar to how the developers at IG seem to have issue with incorporating Eyedol into the game. Furthermore, how would such a character be incorporated into the game story or gameplay-wise?

you seem to have a point and therefore you have. chucky indeed is the most famous movie about this concept but i think we can make more from this… globally there are fans about this sub culture situation about living dolls…and every time i get encounter an enemy like this in a video game ( like conker game) it really gives me chills. Hisako was an excellent example of a possessed ghost and maybe it is time for a similar incarnation . it would be better to see something fresh and new rather than a compilation of monsters that we have already seen in many video game series… but maybe you are right maybe there are issues with specific rights.

Really digging the idea. Thumbs up

Alternatively, some kind of puppeteer character could be cool, with an animated mannequin-like servant doing the fighting for him or her. Depending on how they were able to work that into the gameplay or lore, mind you.

A porcelain doll mask would make a fine accessory for Hisako, if nothing else.

a puppeteer idea would also be cool maybe something like blazblue but it is really really difficult to animate i think. maybe a freaking doll that could throw its own porcelain pieces could be a good idea, nonetheless it is an extreme concept and very hard to even decide the size of that doll.

I wouldn’t mind a marionette attached to a human/demon/other species user. Only the puppet would be in the fight, the user would have a quick quip before and after. In my mind, I see him/her jumping off-screen during the intro and popping back as an Ultra Ender. 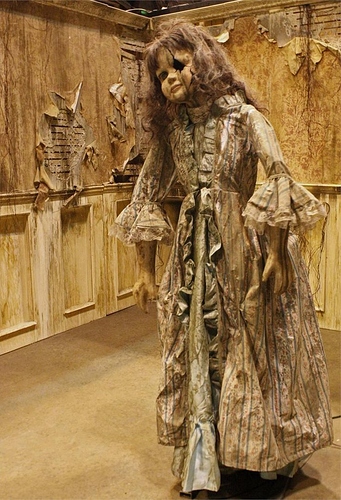 I think the challenge with a female doll is trying to avoid crossing over into Hisako’s territory. The broken and cracked bits, dusty Victorian outfit and whatnot works. Would it be difficult to pull off the same look with a male doll?

Life sized Porcelain Clown… Similar to the above design, but a male clown.

male for sure! hmmmm good mix and also good idea. whatever happens i hope iron galaxy will chhose interesting concepts.

An example of a puppeter from Blazblue series