Ever since this video:


KI is all about the music! Listening to those tunes lets you get inside a character’s mind.

If you created a new character, what musical tune would you have in your mind in bringing it to life into the Killer Instinct franchise?


(with some Godsmack’s Scorpion King)

Japanese (I know we already got Hisako with her Japanese horror trope. But what about a sequel for KI when they get a new Japanese fighter?):

The first video is alright… the second, NOPE!
There’s a lot more to explore about India than Yoga and Priyanka Chopra, and I really hope if there is such a character to come, he won’t be a Dhalsim-like silly stereotype.
South Indian movie stars, if you’ve ever seen any short clip posted by someone with the a title that basically translates to “hilarious bollywood fight scene”, you’ll know that they are just made to be FG characters.


(That is from a really cheap movie by the way. If you don’t understand Hindi and won’t laugh at the hilariously awful dialogue, skip to about 1:40 where every move is basically a Level 4 Ender)
Another inspiration from South India, the martial art of Kalaripayattu,

Kalaripayattu (pronounced as Kalarippayatt) is a martial art, which originated as a style in Kerala, southern India (North Malabar). The word kalari first appears in the Tamil Sangam literature (c. 300 BCE to 300 CE) to describe both a battlefield and combat arena. The word kalari tatt denoted a martial feat, while kalari kozhai meant a coward in war. Each warrior in the Sangam era received regular military training. It is considered to be one of the oldest surviving fighting systems sti Kalari...

This next one may seem like he’s similar to Dhalsim, contrary to what I said. But it kinda isn’t. A more exaggerated version would be awesome and creepy. A witch doctor, sort of.

The Aghori (Sanskrit aghora) are ascetic Shaiva sadhus. The Aghori are known to engage in post-mortem rituals. They often dwell in charnel grounds, have been witnessed smearing cremation ashes on their bodies, and have been known to use bones from human corpses for crafting kapalas (skullcups which Shiva and other Hindu deities are often iconically depicted holding or using) and jewelry. Because of their practices that are contradictory to orthodox Hinduism, they are generally opposed by other Ma...

EDIT: TL;DR I commented on this as a character discussion when it was about music. Sorry about that, possible second edit coming for music fitting to these ideas.

We already got a mummy out of Kan-Ra, despite being Babylonian. A demigod perhaps can join in the ranks.

I mean take a look at Smite’s Egyptian pantheon. 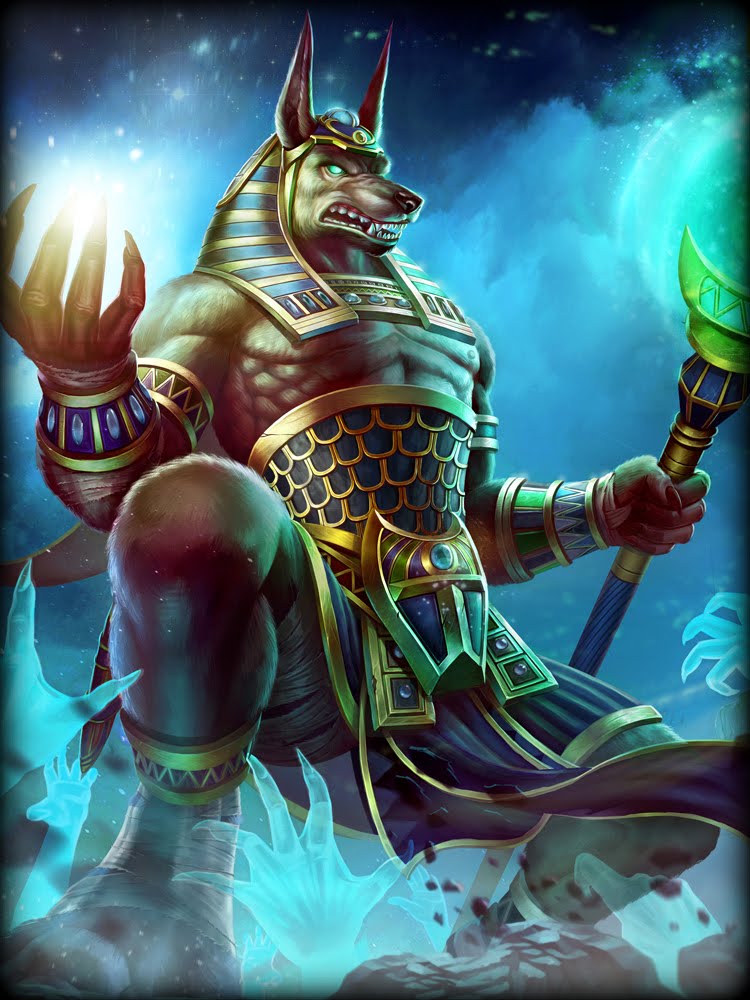 A list of gods of the Egyptian pantheon in Smite.

Khopesh (ḫpš; also vocalized khepesh) is an Egyptian sickle-sword that evolved from battle axes. A typical khopesh is 50–60 cm (20–24 inches) in length, though smaller examples do also exist. The blunted edge of the weapon's tip also served as an effective bludgeon, as well as a hook. These weapons changed from bronze to iron in the New Kingdom period. The earliest known depiction of a khopesh is from the Stele of Vultures, depicting King Eannatum of Lagash wielding the weapon; this would date th...

Have you all watched Yu-Gi-Oh! when you were kids? 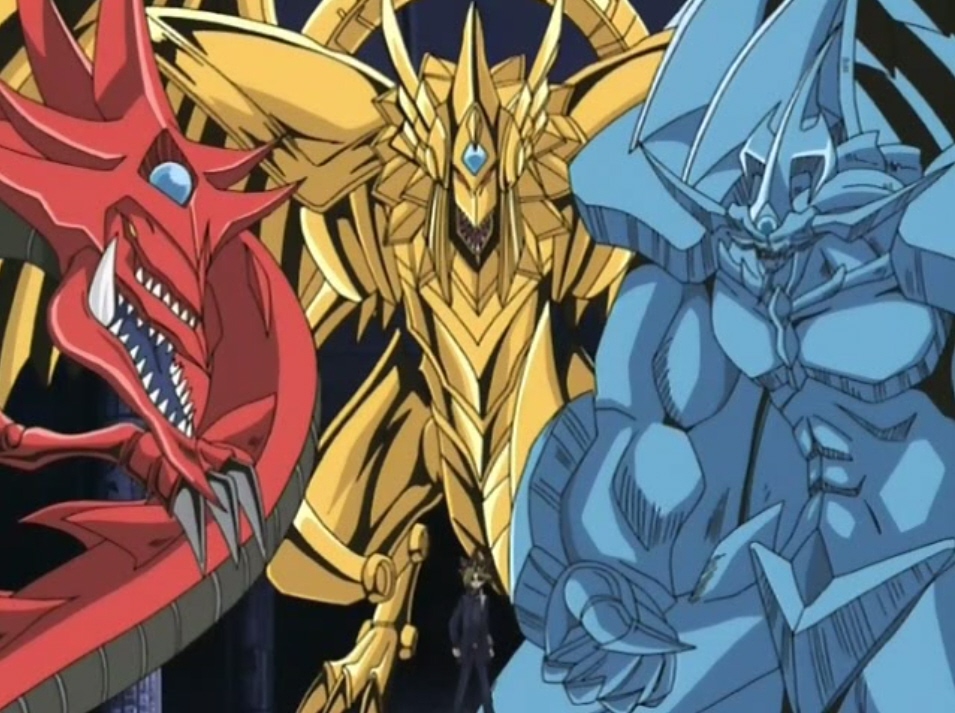 The Egyptian God Cards, also known in Japanese as the Three Legendary Gods (三（さん）幻（げん）神（しん）, Sangenshin), are a series of cards in Yu-Gi-Oh! that serve as a focal point in the series' manga, the second series anime, and numerous video games.... 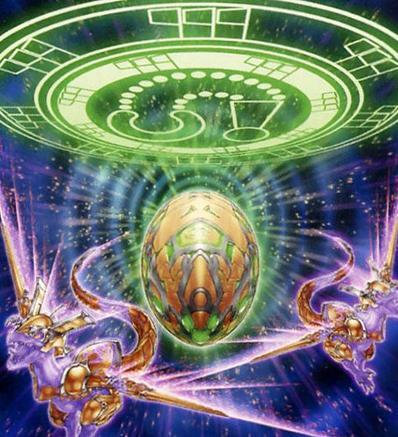 "Hieratic", known as "Hieroglyphic" (聖（せい）刻（こく） Seikoku) in the OCG, is an archetype of LIGHT Dragon-Type monsters. The cards of this archetype rely on Special Summoning and destroying cards mainly by Tributing other "Hieratic" monsters. What makes... 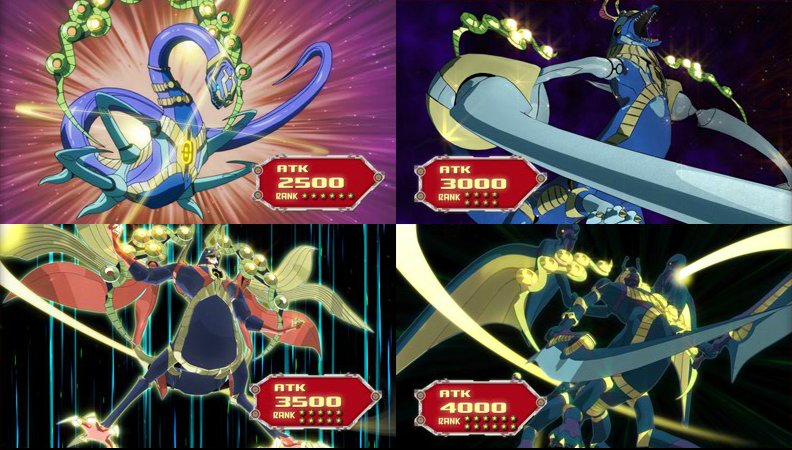 "New Order" (Japanese: ＮＯ（ニューオーダーズ） Nyū Ōdāzu, New Orders) is an anime-only series of LIGHT Xyz Monsters with various Types (primarily Beast and Reptile) used by Eliphas in the Yu-Gi-Oh! ZEXAL anime. Each card in the series is a Ranked-Up version of... 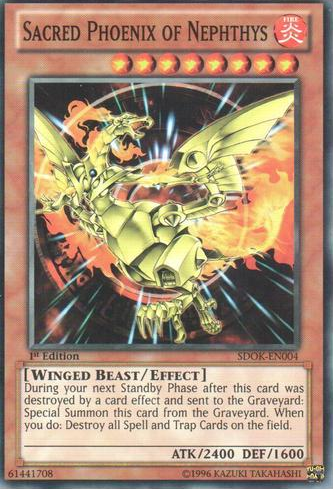 The Arabic, Croatian, Greek, Swedish, Thai andTurkish names given are not official. (card names) The Portuguese lore given is not official. 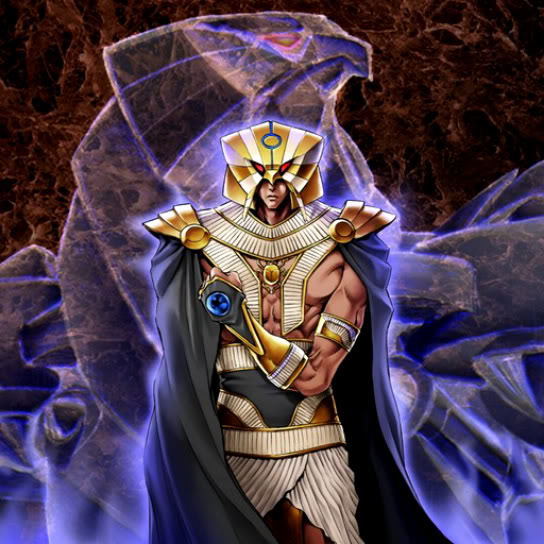 "Horus the Black Flame Dragon" (ホルスの黒（こく）炎（えん）竜（りゅう） Horusu no Kokuenryū) is an archetype of 3 FIRE Dragon-Type "LV" monsters first introduced in Soul of the Duelist. A sub-archetype of the "LV" archetype, they are one of two groups of Dragon-Type... 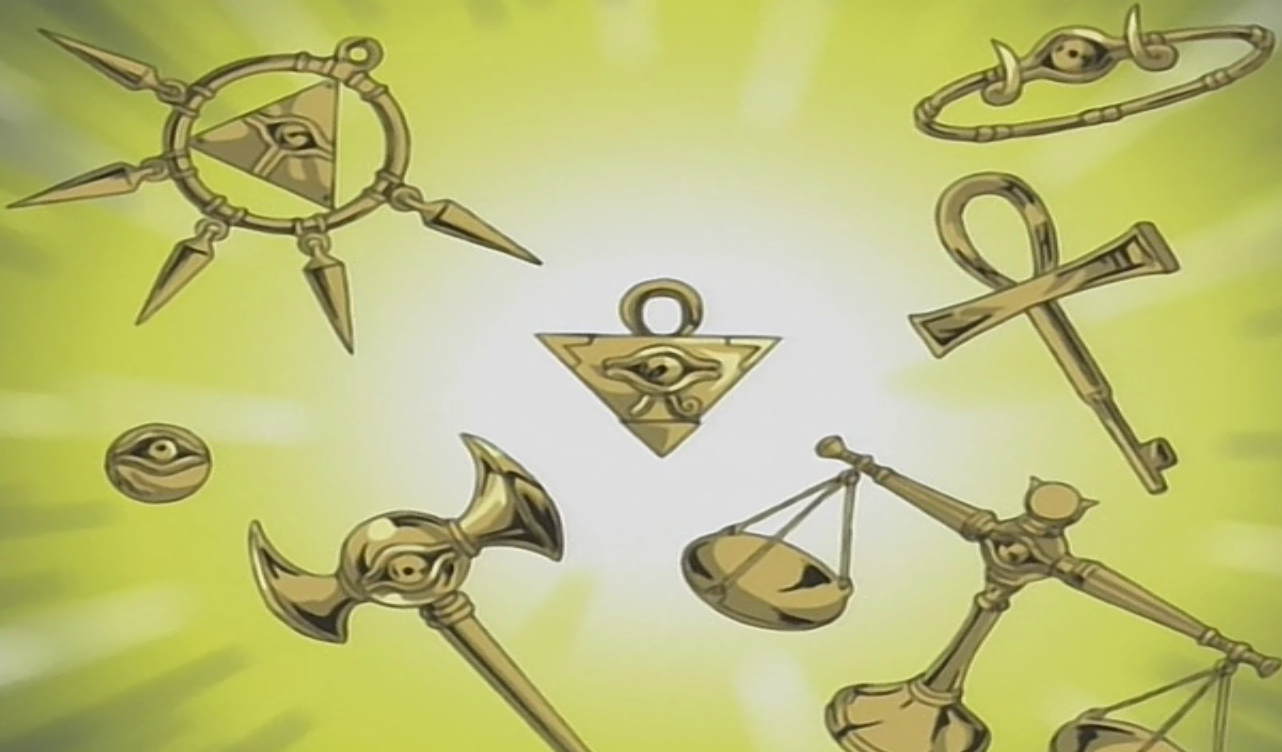 The Millennium Items are seven treasures created from an ancient spell found in the Millennium Spellbook in order to keep the ancient magic of the Shadow Games locked up forever. The Millennium Stone in the village of Kul Elna is the origin and...

It’s got that Egyptian vibe all over.

Some Character of KI are already “Two or more characters in one”: Introduced in Killer Instinct Action Girl: The most badass character in the series, bar none. She took on a God and killed it! Not even Jago could truly …

im REALLY digging that egyption Metal so anythng to get something like this in K.I im all in for. especially for an anubis type of charecter. tall calm mixture of magic and close combat. black(or bright blue) fire etc. 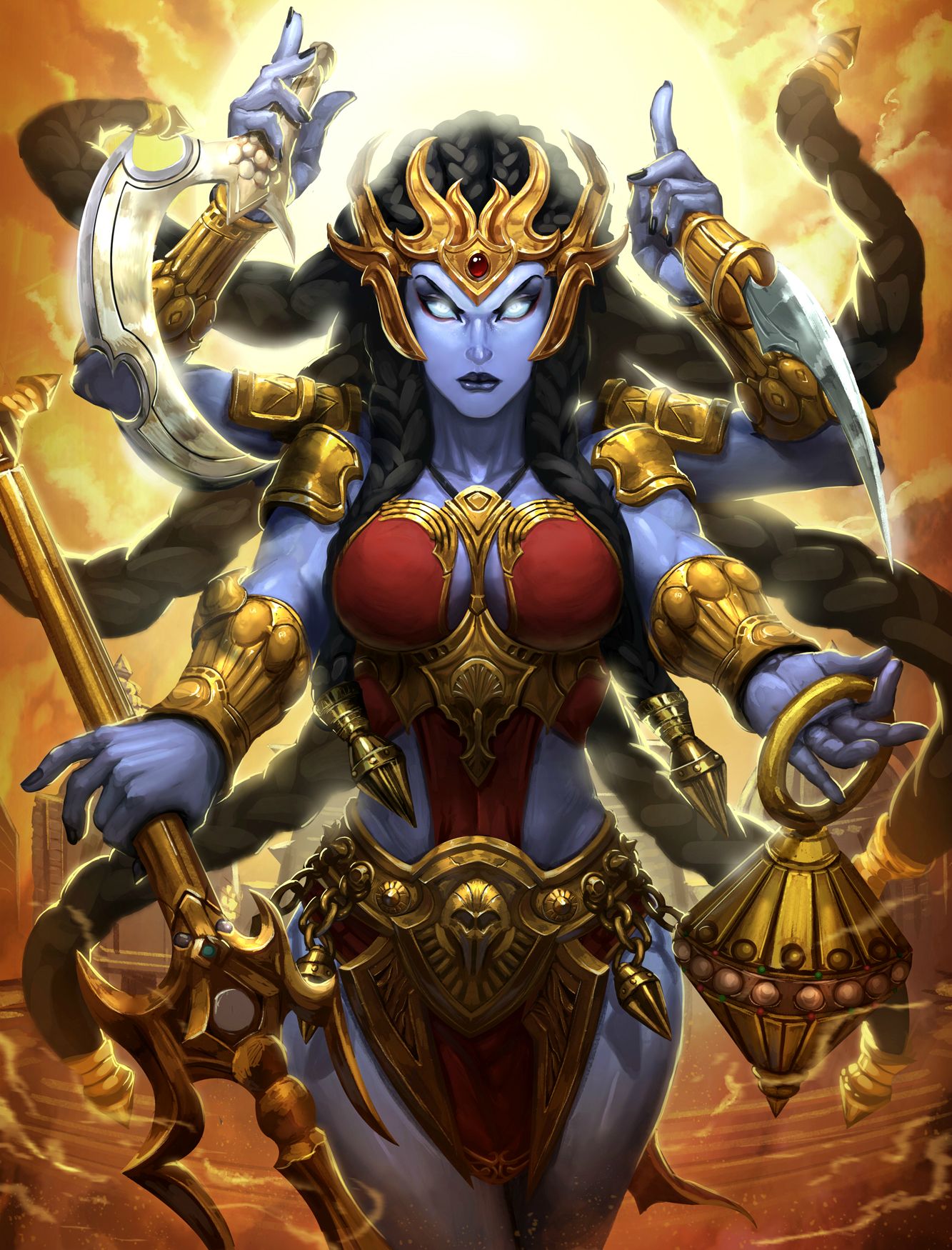 A list of gods of the Hindu pantheon in Smite.

Wait… since India & Indonesia are neighbors… like Kim Wu who is Korean-Chinese and American… perhaps a fighter whose heritage is both Indian and Indonesian join in. Pencak silat (Indonesian pronunciation: ['pencak? 'silat]; pronounced "penchak silat" and sometimes spelled "pentjak silat" in Western writings) is an umbrella term for a class of related Indonesian martial arts. In neighbouring countries the term usually refers to professional competitive silat. It is a full-body fighting form incorporating strikes, grappling and throwing in addition to weaponry. Every part of the body is used and subject to attack. Pencak silat was practiced not only for phy Th... The Garuda is a legendary bird or bird-like creature found in Hindu, Buddhist and Jain mythology. He is variously the vehicle mount (vahana) of the Hindu god Vishnu, a dhamma-protector and Astasena in Buddhism, and the Yaksha of the Jain Tirthankara Shantinatha. Garuda is described as the king of birds and a Kite-like figure. He is shown either in zoomorphic form (giant bird with partially open wings) or an anthropomorphic form (man with wings and some bird features). Garuda is generally a protec...

IDK…I’d rather season 3 finish off the cast for good this time. Unless Eyedol didn’t make it and then we should try and get him in as well.

Has anyone thought about how to bring out characters out with music from the 70s & the 80s?

I can say one thing it would be extraordinary hard to find a charecter that would fit that genre and the dystopian ki universe.

Maybe a juri looking cyborg guy/girl with almost all kicks with neon pink highlights. Their music could be a mix of jazz and disco music. Reminds me of that really tall black guy with really long legs that fought Bruce lee in the tower in I think enter the dragon

Too bad we already got a “Bruce Lee” in the form of Kim Wu.

What about French opera music in something like “Phantom of the Opera”?

doesnt have to have any bruce lee influence though. there are other places to find kick centered martial artists. like the black guy i mentioned that bruce fought…

i suppose if we get an angel he could be a bad guy similar to the phantom.(i read the book and i remember people thought the phantom was an angel because of his voice)

in fact i think it would be cool to have a one winged angel who weilds his other wing as a wind sword hat dresses like the phantom. his style could be skimitar focused with Iado/bushido sword slices imbued with the wind

Where was that fight with that guy in the Bruce Lee film from?

And has anyone else thought of cool music to bring into KI? Cause I feel fresh out.

the movie is called Game of Death. he had to beat the boss of each room to proceed to the top to save someone

Is it this guy?

Anyone else got other music KI can add?

classical music? symphony of a new world is a timeless amazing peice that goes with almost anythng