Nope. She definitely says “Tootsie Wootsie” during the shadow bats!

Ah, so that’s what she’s saying for her shadow. The english phonetic seems to be “letuchiye myshi.” What exactly does she say for her heavy gauntlet attack? It sounds like “rampage” but without the g sound at the end. Or is that the “ya vay” you mentioned? In which case, what does that mean?

I wonder if she has a nice recipe for Borscht.

How is she Russian if she is Maya’s twin sister though? Maybe after she was brought back to life she moved there for a while lol

Mira is Russian? Or just stay there?

http://www.ultra-combo.com/making-music-mira/ "In the Dalmatian region of Croatia, there is a female vampire called a Mora or Morana, who drinks the blood of men" wiki MORA? It may be just coincidence but cmonn 😛 Now I want to know how she is...

That one I dont know but it sounds similar to what Wario says in mario party 1 and 2 when he was voiced by a Russian actor. I cant translate that one.

She reminds me of Decapre who is also russian

It would have been cool if they had the same parents. I’ve read of twins being born with different skin color do to their grand parents. 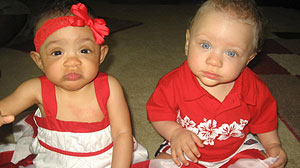 Parents Give Birth to Black and White Twins

Triniti and Ghabriael Cunningham are as different as night and day, but they are part of the new face of biracial America. A pair of British twin boys has been born with different skin color, a rare genetic occurrence according to experts.

It’s a thing, wish it was the same in KI.

Why do you think they don’t have the same ethnicity?

We're sure that by now you've realized that we are going in order of character's original announcements, which leads us to Orchid. Check out her bio here!

“The journal revealed a startling secret: Orchid had a younger brother—the result of her father’s affair with a foreign aid worker whom he had saved in Pakistan. She couldn’t pronounce his name properly—Jacob—and called him “Jay-go” which made him laugh. The woman had disappeared in the foothills of the Himalayas soon after their child was born, and Jacob had not been able to track down her or the baby. He wasn’t present during the birth, but he knew that it was a boy.”

Later in the text it is suggested that said boy is Jago we know.

Pretty sure while we know nothing about Orchid’s mother, this passage reads as if Jago’s mother was a different woman.

It sounds like “rampage” but without the g sound at the end.

It’s definitely Rampage. I dropped all of the audio but voice, you can hear the G without everything else going on.

I’d like to know what she says for instinct activation. I hear “vampira” but I’m not hip to the first word (sounds Russian).

I thought you meant Mira. Ha.

IG will probably confirm something eventually. I wouldnt have known without the Russian guy commenting on my video.

I’ve dug a little on it - I think it’s “Tuman Vampirov”, which would mean “Vampire’s Mist” more or less - but I could be wrong.

Mira and Maya have the same parents.

Yeah sounds like what the guy on my vid said too.

Fallegeros? Why did I find out about her last name on the wikia & not from any trailer or ingame detail or lore?

Who knows, we will wait and see what the story reveals before we declare canon.