This is a real thing, illustrated 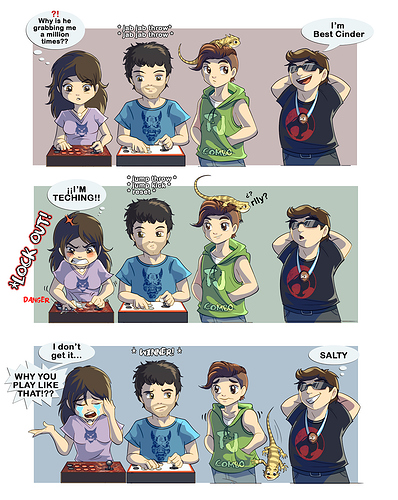 He will do jab and throw, 80% of the time. Holding up is not that bad from time to time…

From left to right: Me, Kinetic DNA and LKensei (TJ Frozen). And finally a player who claims to be the best Cinder in a country no one else play Cinder. So yeah, technically he would be the best cause he is the only one =P

I’m better at teching in SFV. But KI? geez…LOCK OUT, because I rush!!

I ran into an Orchid player the other day that did that jab-jab= throw or opener NON STOP.
NO matter what I did he blocked it and then got the jab jab in…I could never block out of my move no matter how light or safe it was. I just dont understand it and how he was able to get it to connect everytime and no one esle does.
Just block it out and then jab jab combo…ugh