I don’t know how often this happens to everybody else, but this really annoys me. I’m not talking about ragequitting, which we all know too well. I’m talking about something I’m going to call “lamequitting”, which is where the opponent just stops playing, leaving their character idle halfway through the match. This probably happens to me in about 10-15% of my matches in Ranked, right after I take their first life bar. I dislike it even more than ragequitting, which has a little bit more satisfaction to it. Lamequitting is just… sad.

This isn’t what fighting games (or any competition) is about. If you’re going to lose, then lose with some dignity. At least try to get something out of the match, like preventing a Supreme Victory, or landing a Shadow Counter, or even breaking a combo. Nobody’s ever gotten better at a fighting game by watching themselves lose.

What’s sad about this is the fact that it never happens when I’m fighting Bronze, Silver, or Gold level players. Even though they’re outmatched, they’ll still keep fighting with all they have. It only happens when I fight supposed “Killer” level players. This means that if they lamequit the first match, they’ll do it again in the second match when I jump out ahead.

Does anybody else get this at all? Is Killer too diluted? Should there be a ‘forfeit’ button in 2/3 matchups? It’s inevitable in online gaming, but what else could/should be done?

As a heads up, if you lamequit on me, I will take the entirety of the match clock to beat you using only light punches. I play KI for fun, and that’s more fun for me than beating a lifeless opponent.

I can imaine they "Lamequit’ because they don’t wan to quit the match. But I’ve had a maybe only two occasions where I’ve had my opponent quit on me bu jus standin there. Half the time I wait because I’m not sure if they’re controller is busted or their batteries die, so I stop when that happens.

it has happened to me also, i just smash light punch until the end of the match, i think it has been due to i play glacius (zoner), i myself have ‘lamequit’ a couple of times against a good kanra just because i hate the character lol

A very honourable, if foolish thing to do

Whether it’s full green or 1 pixel, a perfect is a perfect! 2nd best matches are the comebacks.

I find it very interesting that you bring this up, because this happened to me for the 1st time just yesterday. I fought the same guy in exhibition with my Aganos ~6 times and won them all. On the 7th fight, he stopped playing and just stood there. I continued to beat him up thinking his battery was dead. However, when he failed to continue moving, I told him that if he didn’t fight me that I would report him for quitting early - this got him moving again. He still left after that fight though. It was disheartening.

I agree with you though - if you’re losing, try to make the best of it. Trying to keep them from getting a perfect or even a supreme is something I vocally try to do (I actually, and often, tell my opponents that even though I know they’ll win, that I’ll keep them from getting a supreme - afterwards, I’ll egg them on - “awesome? As in not awesome enough for a supreme victory if you ask me, my friend!” This in turn, ups the anty and will either get them to try harder to give me an even bigger challenge or ruffle their feathers, and make it easier for me).

The name you have given to this phenomenon is absolutely perfect, because it really and truly is, well, lame…

This happens to me pretty often too. It’s not a big deal to me. Just beat them and get a free win. It’s not like you weren’t going to win anyways. They just know they can’t win and opt to sit there instead of quit KI and relaunch.

I do that too. I give them maybe 5-10 seconds in case their controller died. If it’s something that takes longer, then each light punch is a small penalty. Sometimes they jump back in, or I annoy them to the point where they’ll fight again.

Then there are the ones who start fighting again with no warning, which is the worst possible thing they can do.

It’s not always what you think. I’ve had to stop playing several times because someone was at the door or something needed my attention

Sure, but I’ve found that the majority of the time it is, because they very often start walking forward, pressing buttons, or taunting.

A very honourable, if foolish thing to do

Whether it’s full green or 1 pixel, a perfect is a perfect! 2nd best matches are the comebacks.

I wuldn’t worry. I always stay just far enough to give them space, and I do keep an eye on them >:3

I can understand if someone is at the door, you get a phone call, etc. but it doesn’t take but 1/2 a second to tell your opponent that, especially if you’ve already got a headset or Kinect sensor going - it’s the courteous thing to do.

I do it with my Kinect all of the time (I’m already pretty sociable though, I admit) - “Sorry about the phone ringing - I’ll be right back; feel free to beat me up until then…”

I don’t know, I’d say about 2/10 people in Ranked that I fight have any sort of chat set up. The rest are silent, which makes it hard to communicate that.

Has happened to me as well. And there has been times I wanted to lamequit too! But it just goes against my all playstyle phillosophy. If the person is really destroying me and I have just one pixel left I’ll fight to stop him getting the perfect / or honour.
One day I was put againts a bronze level and he really didn’t know what he was doing, he just stood still and told me “I’m not interested in playing against a Killer rank, just kill me!” I was like…“sure??” - “YES!!” he replyed. Sometimes I feel I want to give them the match when they try hard, but as most of us I think people must earn it. I won’t humiliate anyone that doens’t know how to play. I don’t want them to be frustrated on KI and I want them to keep trying.

I don’t know, I’d say about 2/10 people in Ranked that I fight have any sort of chat set up. The rest are silent, which makes it hard to communicate that.

Whether they communicate or not is besides the point - the only thing that matters is if you have the capability and the opportunity to do so.

Well, usually if I just sit there, Life happens in a way that I must deal with it, but Sometimes, I will just sit there to actually study you and see what buttons you press a lot. Sometimes in Combo, as well, unless I absolutely HAVE to combo break you, I will let you do a combo to see what strength you like to press a lot. It’s more of mindgames to me at least.

But, If you do have a Mic or Kinect, I usually will talk to you and say what’s up, and say witty catchphrases and funny jokes.

You and I sound perfect for each other.

I like to talk and say silly things too; I however, will not just sit there to determine how you play - I do it mid-fight.

I used to chat all the time in KI. Met lots of cool people. But probably more than 50% of the time I would get either

You just get worn out.

I have had more than a few people “lamequit” one me. It’s annoying, but you just deal. I admit, although I have never chosen to lamequit on purpose there have been a couple of times where I needed to get the door or the phone or go find out why a child was crying. So, sometimes it may be for a good reason.

@GalacticGeek To one his own. Lol If you’d like to play, send me a friend request and I will try to play on my free time! (College and Part time job Suck up time…

I sometimes put on my mic purposefully to mess with the lamequitters. One time I was fighting another fellow Jago player, and had a KILLER lead on him. He gave up right at the danger zone… I stood still, and told him, “I’m afraid your giving up ends here.” So, I stood right in front of him, and sat there. Just listening to the music go slower and go to classic. He texted me, “Just beat me and get you free win. I don’t want to fight.” I told him then, "Be Fresh, Not Free! (Which is my motto LOL). So he said ok. Gave me 3 teabags, (To let me know) and jumped. A Dragon Punch made his path end there. Then, what I got in a message, I cannot say, as the filters will kick in like a boss. LOL 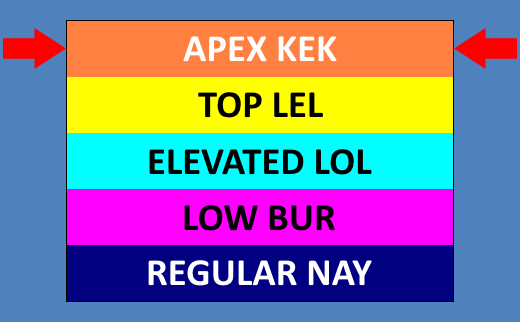