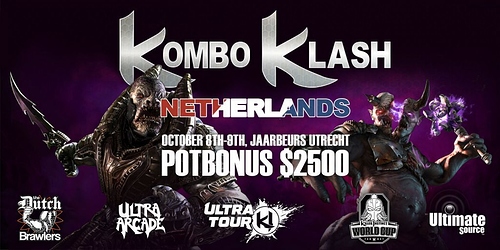 The biggest Killer Instinct tournament of Europe, Kombo Klash Netherlands 2016, part of the Benelux biggest gaming event, Firstlook Festival will be held october 8th-9th in the Jaarbeurs convention center in Utrecht, the Netherlands. The winner will automatically qualify for the Killer Instinct World Cup on March 10th-12th 2017 in San Antonio, Texas!

Also, it’s not EU only, it would be great to have some players come over from the US, Asia come over!

Dang, in Holland, and I cant go (its around the time I’m moving)

Yh there is a few of us. I mean I’m british but part of The Dutch Brawlers who are the guys who are running this even. Alot of people going come down and play man be good to meet you all

I wonder why it isn’t referred to as Ultratrecht temporarily.
/pun
Good luck to the participants! I hope to see some great games in the stream/replays.

Come on, get your priorities right

Also we, the Dutch Brawlers with the likes of Ki4Life, Heero NL, Kenshiro and me are from Holland and on the forums.

Did you sign up for our online monthly? http://dutchbrawlers.challonge.com/kotreu1

I am most probably not able to play at that time… But I when I am sure I can, I’ll check to see if there are still spots left!

I’ll keep an eye on it in the future, though. Very cool initiative!

Thanks, that’s our thing, trying to boost the EU KI scene.

I would love to sign up! I’ve always wanted to got to The Netherlands, I just don’t know how much the flight will be from Texas to the Netherlands.

Check it out for yourself http://www.skyscanner.com

Thank you so much man! But sadly, I still can’t go. I don’t have that kind of money right now.