On the classic MK level “The Pit” revealed in the Kombat Pack 2 trailer @ 00:51 you clearly see a flame character in the back but then the char uses Cinders Inferno and the character he is fightings arms are on fire a la Cinder. Is this a tease of future collaboration? https://www.youtube.com/watch?v=LiKmEa16Iy8

Welp that debunks that even though he does seem more Cinder like in the stage w/ the inferno animation and character being set a flame by it. Thanks

Just get rid of Blaze and say it was Cinder all along…perfect excuse for the crossover.

Shhh, I think IG and NR know it, we can’t let them know that we know.

That’s Blaze, who was originally in The Pit 2 in MK2 as a palette swap of Liu Kang covered in flames. The Green Liu Kang is Hornbuckle lol 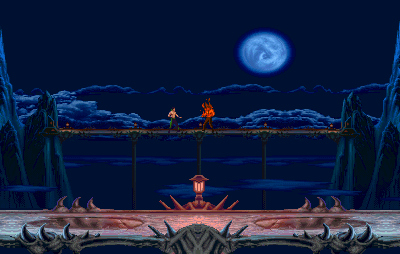 He used to look similar to Cinder in MK Deadly Alliance though, or more so than he did in Armageddon lol He was actually called Torch by fans in the MK2 days but they had to call him Blaze when they added him as a secret character in DA supposedly due to something about it being too similar to The Human Torch’s name

Darn. I was about to post but too late for me. Lol

would be amazing if that NPC was Cinder with all the flame effects correct, but its Blaze, the potential boss for some next MK game (storywise, Onaga shall be the next boss) and please NRS, don’t use Reptile as his vessel again.

Cinder has a very different animation when he uses inferno. Cinder sort of half way crouches down when he does it. I was sure it wasn’t him when i saw it, but thanks to this thread, now i’m double sure.