Am I the only one who would think this would be an amazing crossover? Kiler Instinct fighters vs. the original Power Rangers, with a few villains like Lord Zed and Goldar being playable.

It would go so well with the KI visual style, especially with how the rangers spark when they receive heavy blows.

Why Mighty Morphin’ though? You have loads of other Seasons that imo have something that fits a bit better. Mystic Force has a bunch of magic that KI can use. Ninja Storm/Steel can work as KI doesn’t have Ninjas that use elements. Nothing against the original though. Just make it a general Power Rangers crossover

MMPR just is the most iconic iteration of the Power Rangers, both with the rangers and the villains. I mean even the music style in the original series would fit nicely as stage themes haha.

Throwing in a bunch of different rangers would just cheapen a good opportunity to develop a strong crossover story too. I’d rather they’d focus on Rita merging the two universes or something like that, but it would be cool for rangers of other series to be maybe costumes or DLC.

It came more from the thought that 6/7(if you count green/white) and some villains wouldn’t be enough characters to match the KI cast. Good idea though.

Considering most fighting games have 20-30 something fighters, I think it would be plenty. The rangers, Zed, Goldar, and Rita plus other popular villains like Scorpina and Rito Revolto make up a good portion of the cast. I also remember that Ninjor character who would help them out. Throw in a joke character like Alpha and make an Evil Green Ranger version (in the vein of a Shadow Jago) and it is plenty.

Fair enough. I guess DLC fighters for each season afterwards where each color is a skin would work as well.

Hell, if I were in charge I’d make the Ninja Turtles guest fighters LOL. The ultimate brawl with KI vs. MMPR vs. TMNT

Ooh, I know! What about My Little Pony vs. Care Bears vs. Trolls!? Yeah, that would be awesome!

Im guessing by your (poorly thought out) example, you probably think “Power Rangers is just a kids show!” and wrote it off at that

I grew up on the original, and enjoyed it back in the day - and yes, as a kid, because it IS a kids show. That is an undeniable and irrefutable fact.

The show has little to do with MMPR of today as it stands as a legacy subseries of the franchise in general. People still see the rangers and the villains as iconic, and to be represented in a fighting game crossover would have them presented in a form that is appropriate for the game.

There is currently even an ongoing comic series with the original rangers with a much darker, comic-like atmosphere. Why? Because that is fitting for the usage of the characters. Why on Earth would you think the show’s atmosphere would somehow be used for the game?

Well, a fan made a dark, grittier version of PR, and that didn’t fly, and was subsequently attacked legally by the franchise owners. 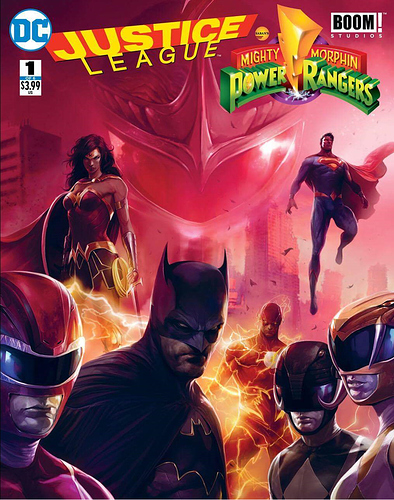 Seems like they would fit in KI to me.

Because that was TOO dark and filled with sex, drug usage, and inappropriate language for the hell of it. It was like a parent saying “You can have a sip of a beer to try” and the kind ends up getting drunk and robbing a liquor store.

The comic is more serious but still very kid friendly, like Disney’s Marvel movies (a nice middle ground). And since Killer Instinct is rated T because of blood splatter, the Power Rangers meeting that universe would be nothing too risky. It would only be a slight step up in terms of maturity for the series and the legacy series is made to appease the older fans.

In other words, don’t act like this would be a Mortal Kombat vs. Power Rangers which would never happen due to the graphic violence

Yeah, even better than meeting the Justice League. The Power Rangers have insane moveset potential.

I can even see their ultimates, like the Green Ranger calling the Dragonzord with his the dragon dagger… that’d be too cool

Comics have all sorts of convoluted crossovers. Archie vs. Predator was proof of that. Does that mean Archie and Predator would make a great game? No, it does not…

Does Archie and Predator somehow prove that KI vs. MMPR wouldnt be a great game? No, it does not,.

All the MMPR characters mentioned could work with the KI fighting mechanics. The villain characters fit nicely into the KI universe as it is. Very little would have to be done to the iconic rangers designs, but they would probably get more muscle definition as this is a fighting game.

Rita attempting to control Gargos and being the reason why the universe meet would be the obvious reason for the crossover and it would be very workable.

I simply see no reason to doubt it would be great

I will admit, even I am excited for the new film.