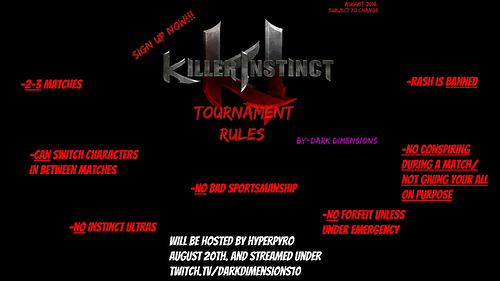 “Rash is banned” Why did you banned him?

I’m surprised Rash is banned and not Eyedol, Shago and Gargos.

I WOULD participate, but I’m hosting/competing in another tournament on the same day.

If the idea is for new players to get better by playing in a tournament of similar skilled players, how does banning a character fit in with that goal? Just seems odd.

Exactly, what if someone wanted to get better with Rash?

This is a duplicate thread, but nice looking tournament.

There’s no signup link or anything and I have no idea why Rash is banned but I’d be down for a tourney like this.

Still no reason why Rash is banned… I’m sure there were some new players who picked up the game simply because of Rash, and if they wanted to enter this tournament, they can’t… If anything, you should followed standard tournament rules at least…

If it’s just a casual tournament, no money on the line, more of an educational/new players tournament, doesn’t seem to make sense why any character would be banned.

This could be interesting for a newer player like me.

You have any more detail on timing than “August 20th”, I’m in the UK and guessing it will be around a US time-frame (isn’t everything). If so though that wouldn’t be too bad as I’m generally on around Midnight our time.

Also, whats the rationale behind no instinct ultras? Is this just to prevent prolonging matches longer than necessary? Would it apply to an Ultra < Recap < Ultra also? (Not that I can do that yet, just curious.)

Guys, its a private tournament. I mean, he has to accept participants, its not free entry. He can set his rules. His rule its no Rash. Why? Its up to him. Maybe is not gameplay related, maybe its just because Rash its the goofiest character.

Nobody is arguing that he can’t ban Rash. People are just confused as to why he is (myself included).

Nobody is arguing that he can’t ban Rash

I didn’t said that you were arguing xD

Sorry if it seemed like that, not my intention

Ok I will go through the reasoning of the rules starting with Rash.

The ruling of Rash’s banned in the tournament was brought up by a previous contestant and was voted among others to ban it is also understandable that most people new to the game can not keep up with rash’s unpredictability. But overall he was banned from vote. The tournament rules are changed every month and i cant change it for this months. Rash may be unbanned in the next months version,

No instinct ultras or recapture ultras to conserve time, you are allowed one full ultra or a ultra ender.

No poor sportsmanship (self explanatory)

No forfeit unless under emergency because it messes with the tourney

Those are the reasonings and remember they are subject to change