I will be out of commission for a couple weeks. Killer Instinct broke my game pad. LOL 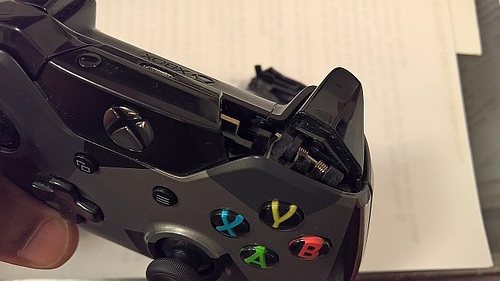 Hahahahahaha mines breaks too ooh. Lol in all seriousness my RB is pretty loose and I’m starting to worry, especially since I have an Elite.

Holy sh** dude, the same thing happened to mine the day before yesterday lol the right trigger finally snapped off after being lose for the past couple weeks. Luckily I purchased a backup pad when I got my XB1.

Ha! Yeah, those bumper buttons take a beating in certain games. I can still tell which controller on my 360 was used for Battlefield 3 because the right bumper (melee button) is permanently depressed about a quarter of an inch compared to the left.

I’ve gone through 2 controllers already. Looking forward to getting my Elite in a couple of weeks. I hear that is MUCH more sturdy than the stock, let alone the cheap-o-s you can get at walmart or where ever.

Yeah I’m thinking about just getting the Elite. I need to save up for that. LOL

Oh snap, you Elite RB is loose? Damn, I am thinking about getting one.

Feel like I’ve heard too many people say that their Elite controllers have broken in some way or another. I wouldn’t personally make the investment - you might as well just get a fight pad or another generic controller at that point. If one of those breaks, it’s a heck of a lot less to replace it I’d think.

good grief an Elite controller costs as much as a fightstick can you replace the inevitable broken buttons easily in that thing?

Happened to me too, on the new xbox controller with 3.5mm jack. the old xbox one controllers are more resistant

I brought an elite controller from BB. Helps to get the warranty. Was able to trade my broken one for a brand new controller.

Sabrewulf Heavy Double broke mine not so long after I bought the game and the machine.

What stick did you buy?

Same thing for me, a long time ago. After over a decade playing fighters on pads, I finally took the dive and switched to arcade stick with a madcatz TE right around the time they launched, and I couldn’t be happier.

Razer atrox dual modded for ps4 flip a switch and boom cost 170 for atrox and 30 for the fightpad to make ps4 capability.

I’ve had to replace a few Dpads on controllers, but I haven’t really had any issues with the shoulder buttons go out.
It may start happening more since I changed the way I play. Up until I started playing ranked seriously & got to gold/killer ranks I didn’t use light attacks much, I just mapped them to the shoulder buttons and mostly forgot about them. Now lights are mapped to the R bumper/trigger, so I’ll probably see the R bumper go out in one of my controllers.