Hey Killers! So I couldn’t help but notice that when Max was demonstrating the new Combo System the game itself was visually improved to a noticeable degree. I got excited and thought to myself that maybe their was a ninja visual update in CU 2.13. But come to find out theirs nothing of the sorts.
So I figured this is either an early build of a later patch… OR! 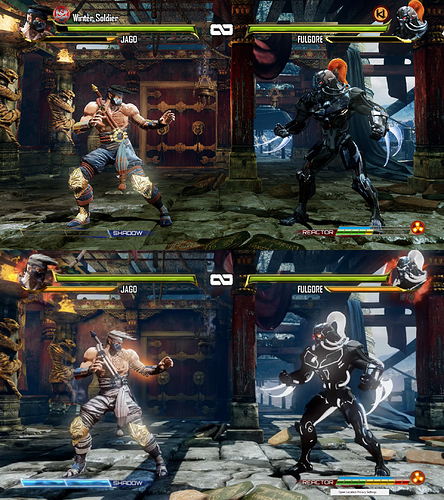 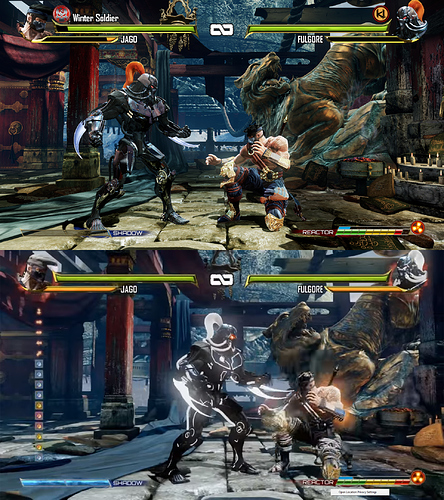 KIVisUpgrade2.jpg1920×2160 2.57 MB
More than likely this is footage of the PC version of the game. The main reason I think this is the shaders are not just improved but completely overhauled. Things like dynamic lighting, emission, fog and other new elements are now present. Which requires a bit more horsepower than the Xbox One has had. But the last clue Iron Galaxy may have left that we’re looking at the PC version is this…
http://communitysiteswest.blob.core.windows.net/…/Fulgore.j…
This was the screenshot used for the banner of the Fulgore expanded lore article. For those of you who don’t know what it is about this that’s a dead giveaway, is the fact that this screenshot is captured at native 1080p… KI on Xbox One runs at 900p. Not only that but the AntiAliasing (A technique to remove jagged lines) is cranked up extremely high! As all we all know KI on Xbox One suffers from jaggies pretty hard.
Point being, take a look everyone. This may be what KI looks like on PC in March, and I couldn’t be any more excited!

These are clearly screenshots from MAX’s video on Combo Assist. That video may or not be the PC version simply because Combo Assist was not out when Max posted it so either he has a Dev Kit Xbox One that gets updated by IG or it is indeed a beta version of the PC client.

Yeah I stated that these were from Maxs demo video, but I think the complete overhaul of the how the game handles things from materials to shadows leads me to believe this is not just a upgraded version of the X1 port.

I think the biggest clue is the AA difference.
This could all just be placebos but you never know

EDIT: After watching it again I noticed he was using a weird looking PAD to to play the game instead of a stick why would he be doing that unless he couldn’t because the drivers for Sticks on PC aren’t working yet

Yeah without some better shots it’s hard to tell, but some of the updated effects have me really intrigued as to what the PC port has in store for it.

But yeah the placebo could be very strong cause I’m chomping at the bit to get some more details on the PC version!

Without a doubt the game looked better in that video Max posted. It’s not just a placebo, it was instantly noticeable. But it’s clearly the PS4 port.

IMO it’s them finally releasing a version for the Neo-Geo Pocket.

i noticed that i looked completely different too… the whole video looked fresher things have DEF changed or this is the PC version.

the lighting seemed to be more dynamic.

But yeah, this is definitely a dev build of some sort:

My guess is he has a dev build on the PC so he can more easily do his trailer work. I don’t think it’s that big of a surprise, although if this is the PC version, it does look nice!

Very interesting find indeed,and chance of IG or someone from the team to verify whether this is PC or maybe the XB1 is receiving an graphics update in season 3.
DX12,1080p,better shaders and increase in AA.

pc version gonna look guood, no ■■■■.
I think you should worry more about how the console version is gonna look.

What’s wrong with the way killer instinct looks on XB1,only one thing I would change or updated is from 900p to 1080p other than that it looks and plays fine.

they must upres to 1080p atleast, if they dont want to lose another pr, to ps4 and sf5

Yes agree IG needs to upgrade resolution to 1080p for KI on XB1.
And also advertise it as well,because some people still think this game is 720p…until you correct them.
1080p is a good marketing tool and will help KI to compete when SF5 comes out on ps4.

If someone else has corrected/clarified your theme point, I apologise but I only heard Aria’s theme which could’ve been added on, but I’m happy to stand corrected - will have to take another watch.

The graphics really aren’t that great. Look at the anti aliasing alone. It’s really bad. The textures are decent but nothing amazing. The particle effects are pretty good. This isn’t the fault of IG or anyone else other than Microsoft putting out and underpowered console. I hope they update a lot of things for the PC version graphically.

The lighting is the most dramatic difference I think, but the aliasing is much nicer as well!

I have no doubt the PC version will look great. I can only hope that the Xbone version gets a visual update as well, since the optimization should be getting better for game at this point.

Oh, the things I cannot wait to see…