KI Movie Script (Currently being made)

So I wanted to make a big project on my computer again and I thought I would make a KI Movie Script, once it’s done, I’ll post it here on the forums or with a pastebin link and I hope the MS and IG team read
it and gives me feedback! Here’s a sneak peek of it: 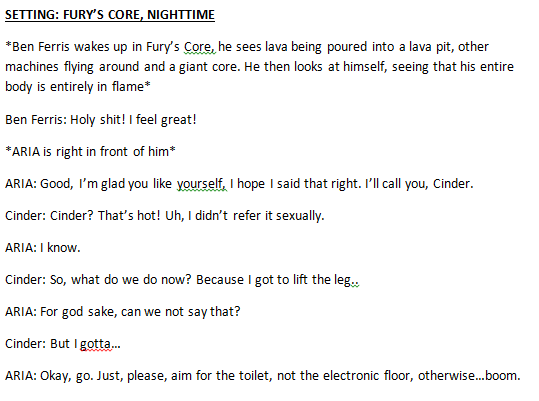 As the resident screenwriter, here are a few tips…

If you are aiming to create a movie script there is a specific format that is generally used. There are small tweaks between film and television, but all in all they follow the same process. You can commonly find formatting books at the library or at a book store.

A few examples are:

To introduce a scene you use EXT. (For exterior) or INT. (Interior)

This tells the director/ actor/ alt staff the location and time of day.

Action is then broken up in short easy to read and understand paragraphs. If a character speaks you type their name in all caps at the center of the page, with their dialogue written under the name.

In short… your scene should look something like this…

BEN FERRIS (BEN) wakes with a start and quickly scans his surroundings.

Welcome to the h.e.l.l. of the future, Dante would be pleased. Molten rock pours into a lake of fire as torrents of flame shoot into the sky.

SWISH, Ben ducks just in time, as a demonic-looking flying machine sails past his head and joins other machines working on a massive central core that is located at the center of the fire lake.

He instinctively raises his hand to sheild his eyes from the light and then notices something. His hand is on fire!

See what I mean about format. It makes the screenplay easier to read. Obviously what I wrote isn’t perfect, but I created this just to give you an idea.

Secondly, in most cases game designers, movie execs, ect ect ect. are not able to even consider a screenplay without proper representation (such as an agent) or a signed Submission Release Form. I’m not trying to burst your bubble, but that is usually how it goes.

I also wouldn’t recommend sharing it on a public forum, as it opens you up to theft and a whole host of other problems.

Great! I hope they accept you to make KI movie! But I wonder which you will make KI animated or live action?..

Technically speaking, the source material is already copyrighted. If he was to pursue an actual submission, he would first have to acquire the rights of KI.

At this moment it is fan fiction and subject to the rights and limitations of such.

So technically he can post his KI fan fiction all he wants as he can’t copyright it as his own work.

True, but what’s to stop someone from stealing it and claiming it off as their own.

A simple watermark would solve any worries though.

I was going to base it around live-action. I have a PowerPoint of the actors for a real movie.