If we got a finale grand finale season 4, what things in the KI lore would you like to see show up?
Playable characters:
eagle - thunders brother showing up.
dojo trainer - come to life possibly the original trainer of Jago.
Mullaska - I just want him so bad he looks sweet
Stages:
Mira to get a vampire coven stage to see what her lair looks like and her coven of vampires.
eyedol stage -could get his tower where he ruled as a human. It could now be in rubble.
Dojo trainer stage - I’m dying to see the stage from KI come back of a wooden bridge moving in the wind.
Game modes:
Story - see the first official KI tournament in all its glory.
Arcade ladder - Have it bring tons of arcade ladders like KI 1, KI 2, retro ladder etc.
Survival mode - I want survival mode to have three settings. Normal, retro and custom (random color and outfit).

Story - see the first official KI tournament in all its glory.

That already happened in S1

Imo if they introduced mira in this KI then they would probably introuce eagle too. My guess is season 4 will be the last iteration for this KI. Also who the heck is mullaska ?

They never did actually show the first killer instinct tournament because eagle was the winner of that tournament. It starts off with the second one.

Mullaska was a concept art for a character got ki3 think Blanca from sf but a snail. 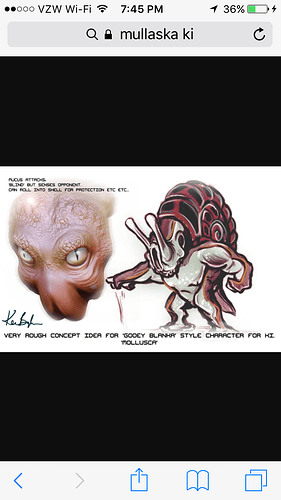 No chance the creator of this character would happen to be you, right? Or a close friend?

I forget his name. I think Kevin Baylis? lol it was the guy who did the retros for season two.