I would choose these for my 8 S4 newcomers

Tar/Sludge Monster/Legion/Hive Mind Character (Creature that can exist as multitudes of himself in many locations, it serves the Final Boss)

A spy unlike what DH thought Orchid is 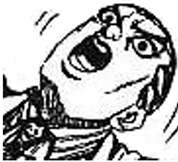 Lol. Back to topic. I really want to see person with possession spirit like Stand join Season 4! That would amazing!

Yeah, I would make the character a mix of stand and puppet giving you a multitude of options. Turning your stand into puppet form would come at a great risk though (luckily you can have your stand exit puppet mode and return by your side to keep it safe)

Yo wait I just realized

Were you inspired by my response to you?

If they chose to make 8 more characters, these are my choices:

I would really love to see rushdown glacius. Although I kind of have a feeling that eagle will be that character.

I noticed your a mvc fan

I’m glad to see our species is still alive