So this was announced at gamescom, but I haven’t seen much talk about it here despite the numerous dinosaur fanatics I’ve seen here. Frontier (the guys behind most notably Elite Dangerous and Planet Coaster) are making Jurassic World: Evolution; a theme park management sim with the Jurassic World IP in the same vein as Jurassic Park: Operation Genesis from 2003.

Like JP:OG, JW:E will be getting a multiplatform release on PS4, Xbone, and of course PC. It launches in June 2018 to coincide with the theatrical release of Jurassic World: Fallen Kingdom.

Here’s the first look at in game renderings of the dinosaurs just doing their thing.

And here’s a recent conference Frontier held to talk about the game’s mechanics and features.

I’m sure I will get this, because my son loves this type of game. But my enthusiasm is a bit tempered by the fact that we already have multiple iOS Jurassic Park/World games that more or less play the same way.

What genre is this?

Yay back to the cool looking T.rex! Because you… Aren’t as cool, but you have some fashion indeed

I can go back to my scaley T.rex then

Definitely gonna go with “less” . I’ve played a lot of both the park building PC games like Zoo Tycoon and Operation Genesis as well as a lot of the mobile town building games like JP Park Builder or Ice Age Village and they’re very different styles of games. For starters the mobile games tend to use real time/microtransactions so it can take days to build up a certain structure, and in the end upkeep basically amounts on clicking on the exhibit to collect “rent” and hitting the feed button once in a while to level them up. Plus they’re more multiplayer online focused with the addition of PvP and the fact that they run in the background while you aren’t playing.

Meanwhile park management sims are all about managing income and upkeep, from cleaning rubbish around the paths, building bathrooms, and watching for inclimate weather that could ruin your structures or power outages that could let your animals loose. And rather than having a prebuiltcage for the animals you build and maintain habitual enclosures.

Did you make these Maru? I think I remember you telling us (or just me, don’t remember) that you are a Illustrator.

I know she didn’t, because the first one is concept art for the game Saurian, and the second one has been floating around DeviantArt for a while. Though it is a testament to get skill that we’d think it is.

@MaruMDQ this actually is a pretty fascinating thing for me to look into, because there’s a lot of more modern dinosaur science that is pretty interesting, but there’s also a lot that I think they need to reevaluate. I know they’ve found large feathered carnivores, even in Rex’s family tree, but all the large North American tyrannosaurs have had scaley skin imprints. And the discovery of a dinosaur voicebox that suggest that dinosaurs couldn’t roar should really only be applied to that species or family of dinosaur. Otherwise it’s like analyzing a cow’s voicebox as evidence to why lions can’t roar.

Ooh, thank you for pointing this out! Not only is this Jurassic Park-related but it’s also made by people who were involved in Planet Coaster, so it ticks a lot of boxes for me, I’m pretty darn excited now! Looking forward to seeing what it’s like to build a real, functioning dinosaur park, but perhaps most importantly, (and let’s face it, it’s what most of us would like to see) is what exactly goes down when something goes wrong. The mass scale chaos that occurred in World would be pretty amazing to see unfold in game form, whether you actively tried to stop it from unfolding or not, fun times!

Not that ones, but I posted some in the favourite dinosaurs topic =)

As @Fwufikins said, the first is from Saurian (one of the guys that work in that project is from Argentina too, and we used to work together in the same studio) and the other one is a funny reference to the “turkey T.rex”.
I have a nother version which is scaley and a newer with “fur”. But I’ll go back to the roots and make some scaley T.rex soon. Or maybe some Primal Rage fan art. We will see XD

So to resurrect this, the game is less than a month away and we have lots of info!

-5 unique islands each with their own weather, size, and even day night cycles!

-Genetic tampering and such for dino customization

im getting it on PC, cant wait!

Looking forward to having a game with both depth and beauty. So far there’s a lot of cool systems in place and really sweet models to look at!
Apparently they have a special code to make sure that a dinosaur’s feet always conform to the ground realistically so they can walk up and down hills and such without ant hiccups, and run on uneven surfaces without it looking like a treadmill!

i also heard the team actually got the CGI assets from the movie studio for the dinosaur models we will be seeing in the game. plus, you have jeff ■■■■■■■ goldblum as an advisor throughout the game’s campaign! man cant wait for this one, its gonna be fun as hell.

i want to make at least 2 parks. 1 for serious business, and another just to see what carnage can happen. in jurassic world movie they put rexy’s paddock amongst the populated area. she was already old, so not as scary and aggressive but still got the job done to kill the i-rex (with help from a raptor). im gonna put the raptor paddock there instead and see what happens haha

I have a perfect foolproof plan to make the exhibits inescapable. If we can effect the terrain, I’m going to make it so ever exhibit has a 20 foot pit in addition to the fence, in addition to having moats/treelines to prevent the animals from even reaching the walls. I’ll then have a bunch of viewing towers and monorail stuff so guests can see them from safety.

That way even when the power goes out the dinosaurs won’t be able to escape. Theoretically, anyway. If they’re implementing realistic movement it should work to keep them from glitch hopping out of it lol

Edit:
So we just got some more news! There will be a sandbox mode that can be unlocked through the main story, as well as a free update with more dinosaurs and such when the movie Jurassic World: Fallen Kingdom hits theaters!

i like your idea, hopefully it wont lead to this 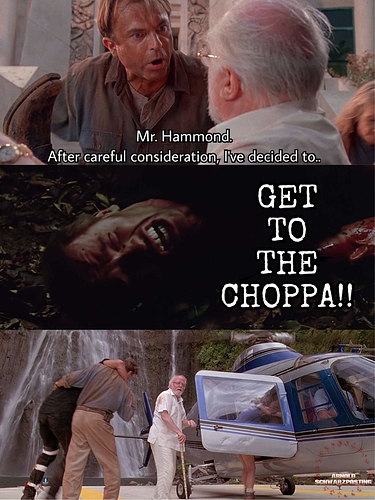 that said, i havent thought of ideas when it comes to how im gonna set up the paddocks. not yet anyway, but i think your idea could work, but also consider you might need a way for jeeps to get in there whenever a dino needs some TLC for whatever reason.

also that is wonderful news, i knew there was going to be a sandbox, no way theyd leave that out but its great nonetheless to be assured. i wonder what fallen kingdom update will bring, its looking to be real hype so far for a park builder

I could always get really good at controlling the shots, or build elevated pathways through the exhibit using the same pit principal. Or maybe helicopters?

The Fallen Kingdom update is going to include dinosaurs that are in the movie that won’t be in the game at launch I imagine. So things like Carnotaurus, Baryonyx, Allosaurus, etc

thats true, you can always use choppers. idk though if jeeps are needed for specific cases. if that is so, you can make a gate for them, but make the road in a trench of some kind. if a dino busts through he’ll be stuck going one way letting you come in and you can lead the shot real easy to K.O. and retrieve.

itd be a really good creative outlet for him, like legos minus the mess and you stepping on them barefoot lol

and you stepping on them

In Soviet Russia, the Legos step on you!