So much hype for Gargos yesterday. I think the character is quite amazing, and the design is nice…

First, he’s design is cool, and he’s TALL, but not so massive as Gargos was. In KI 2 Gargos was smaller, but much wider and massive. Adding to the fact that Gargos was actually a gargoyle (hence the name), and now it’s a Demon. I’m okay with that change though, but it breaks a bit the “old” character we knewed.

Second, none of his move is an KI 2 one. (except maybe his throw which might be like hist fierce uppercut move). No air fireball, ni cinder-like inferno, no shoulder bash, no overhead slam…

Don’t mistake me, I know character’s specific mechanics are good, and the character must evolve, but actually it just look like a whole new character named Gargos

They’re all “new” characters its a reboot.

They’re all “new” characters its a reboot.

That’s because the old Gargos was far too bland.

I think Jago, Shago, and Omen are inheritors.

That’s because the old Gargos was far too bland.

Yes, I suspect Eyedol will likely get the same treatment but of course certain people would probably whine about it.

Certain people always whine, even when they get what they want.

Gargos was one of my favorite chars in KI2. I expected a totally new moveset, and there it is. I’m really happy with it, and I’m very grateful to the @developers for what they achieved, not only with Gargos, but all the game.

Thats the reason I really hope Eyedol its in. They nailed every other character, making them unique and amazing. 24 characters. 24 great characters. And at least 2 more to come. And Eyedol was my favorite from the original KI.

I hope Eyedol its one of them because they have the potential, the talent, and the big balls of steel they need to make Eyedol (or any other character) great. Sure there are issues we all know. But without risk, there is no glory. And if Gargos, who has great tools for each situation making him an aerial superiority/zoner/grappler/summoner, a “regular gargoyle with mostly borrowed moves” can be AWESOME, then a two headed cyclops can

I’m counting on you, you can do it

ALL the characters in Killer Instinct have been through a redesign process, both looks, gameplay and story-wise. This Killer Insinct isn’t a sequal to the past ones, but rather a reboot, however, with elements kept from the past games.

Same with Gargos. If that surprises you, then that’s your own fault.

Yes, I suspect Eyedol will likely get the same treatment but of course certain people would probably whine about it.

Who talk about whining ? Pretty sure I wrote “Don’t mistake me” somewhere

Exposing a feeling right there. I main Maya since Arcade KI2, and I’m happy with the change she got (and the whole Dagger and Pips things), and like I said, Gargos is quite amazing and has nice design (Repeating myself here). And I’m not much into gargos anyway (talk about Eyedol, much more interest)

That’s just… not even a common move with his KI2 version seems kinda weird to me. They could have named him anything else, the only thing in common are the wings and a “general” aspect

ALL the characters in Killer Instinct have been through a redesign process, both looks, gameplay and story-wise. This Killer Insinct isn’t a sequal to the past ones, but rather a reboot, however, with elements kept from the past games.

I agree. But all others characters keep some moves they had (amongst new moves and enhanced gameplay). It’s a Reboot, but it keeps the core.
I agree Gargos had a few move that may be obsolete too

Compared to his old moves, I like this iteration way more. You also have to consider that he had to be playable amongst the rest of the cast, that required adding moves that he didn’t have. If you honestly think about it, with this cast, none of his old moves would be any good.
Sure, I can get behind the idea of your post, and I don’t think you will be the only one feeling this way, but you gotta admit the good outweighs any negatives from not having any callouts to the previous version. I mean, he’s a trap-grappling, air superior summoning character!

I know this isn’t about design but I’d just like to put this in there. 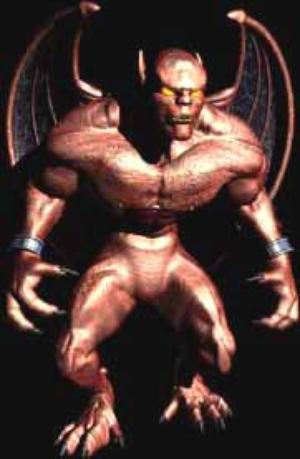 When I look at the old Killer Instinct 2 and I try to compare Gargos from then and now, I can totally tell that that’s Gargos. It didn’t matter how wide he was or how he has horns now. That is definitely Gargos.

Now on the topic of gameplay. You have to consider that every character has to be unique in some special way. Not just some special way actually, most characters are unique from the ground up. But you know this already so I won’t go into it.

My point is that when I look at him, he totally looks like Gargos. That’s it.

Just like I do with all other characters I make a list of details that I can use to compare past and old Gargos.

I admit, unlike alot of the other characters Gargos has honestly been changed the MOST. But oddly it does feel like Gargos, just VERY VERY new.

Honestly aside from just being a Gargoyle I don’t remember Gargos THAT well from KI2. Infact I don’t even remember KI2 that fondly as much as I did KI1 for reasons.

But If ya ask me, Gargos I think appears more powerful than his previous counterpart who kind of just had moves Cinder and Riptor had, but since those two are back I don’t know if it would be necessary to give him the same moves.

Gargos wasn’t a cool character in KI2. He was a lame boss with a boring and unoriginal moveset, and his design was pretty bland too.

But now, he is ALOT more awesome! Both appearance and moveset wise!

So no, it isn’t the same Gargos. It is a BETTER Gargos!

Certain people always whine, even when they get what they want.

Don’t mistake me, I know character’s specific mechanics are good, and the character must evolve, but actually it just look like a whole new character named Gargos

i respect this…some people here are huge Gargos fans… and those people will feel the changes.

i personally love the new Gargos. for me he feels like Gargos or more how Gargos should have been back then.

The wings are a huge part of that fore me. They are a pure work of art!

this however is very true! Gargos has nothing from the old games lol. like 0. For me this is a good design choice but i can still respect how some fans could be a bit thrown by this.

Overal to anser your question:

Yes he feels like Gargos to me but this time its a Gargos i can be proud of.

but yes i understand how you feel±

It is a big improvmet. I like the new Gargos. Now let’s hope they can do the same for Eyedol.

The old Gargos is too buff and his wings so small, how could he possible fly with those little things… The redesign looks way better and makes sense!

The old Gargos is too buff and his wings so small,

He does have the laugh which he pretty much used on me 50% of the time in KI2.

They made him an actual character… original gargos had large wings to heal instead they used the soul eater to take shadow bar… his cinder-esque swoop is still there, but they involved his wings as and actual weapon not just a lifeless aesthetic… It is Gargos 100% improved, he actually has a move set… I don’t think your really analyzing the comparison correctly, the only change is the fire ball, which I think the minions make him more fun, less bland, and adds a very interesting dimension when fighting or using him