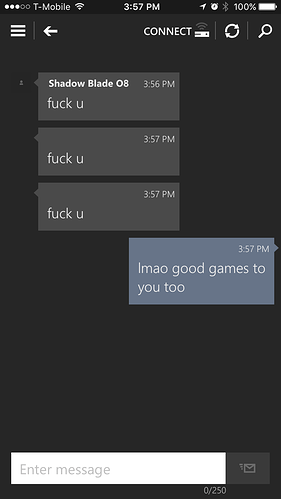 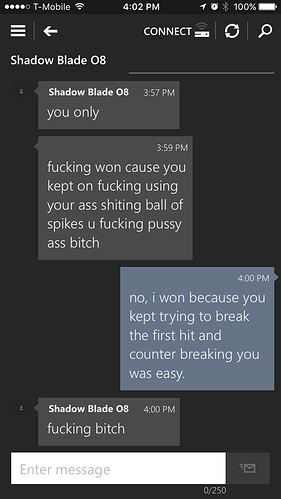 I wanted to start this topic to see if they can relate to this.

sometimes i just dont want to play serious. i know its ideal to spend time in the lab to learn a new character or test moves and such, (personally, i find the best training to be getting out there and seeing how people play.) but whenever im picking up a new character, or picking up a character i never touched, no matter what mode i pick, the other player wont give an inch.

its obviously not a game breaking issue but its just sad that even in exhibition mode people are super competative. if youre just going to play 1 match, spam jump heavy, taunt if you win, then dip, why arent you doing ranked?
Then of coarse when i beat them i get messages like these.

i thought the point of exhibitions was to be casual but ironically, i find a majority of players being super competative. I know i could make a lobby but nobody ever joins them and even if they did, i still get issues from time to time with the lobbies.

Maybe this is only an issue for me since i never play locally or privately ;-;
but it would still be cool if there was a new mode or something or maybe just a bit more love for lobby mode.

i put this as general discussion because its not a high priority issue, just want to see if im the only one.

Ball of Spikes? Who were you playing?

It’s not dead. It’s just he was salty. Most people come into KI, forgetting that it is two way interaction, so they get blown up when faced with a Killer. I get the same messages from time to time as well, don’t worry. Casual play is alive and well! I actually played a set with a New button Masher, to the point he was like, “Can you teach me to play like you?”. I agreed and taught him some stuff. Maybe you just found the wrong person?

glacius.
hes referring to hail.
the sad part is that he was a master i think and i cant imagine how many other people dealt with this.
sigh* guess i did.

there are sooo many times where i see that they are a button masher, use a character i know i suck with to go easy character, and then they destroy me/taunt! pretty sure they made a new account or played at a friends house but it gets seriously frustrating when all i want to do is make the game fun

You should totally give them this: 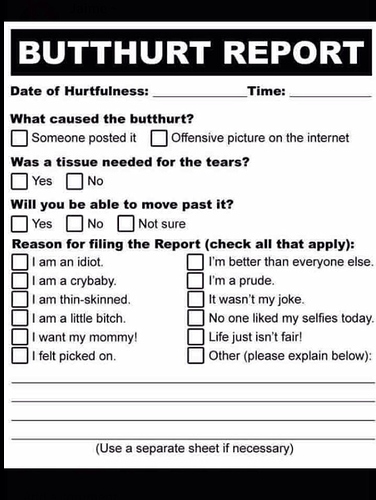 In all seriousness don’t let it get to you. tey either learn for their mistake or do something else.

HA!!! the typical *“my skill was flawless and I cannot get to a easy to pass move” attitude. When I went up against someone who complained in a match I told them to try something else. Only a few people actually did.

I must print this.

How do you guys run into these people? I’ve had nothing but GGs since about November.

I feel like the proper response would have been something along the lines of
#“YOUR TEARS ARE DELICIOUS!”
[URL=http://s921.photobucket.com/user/13MATTallica96/media/ibitsu%20eyeball%20eating%20lolita%20ghost%20girl%20spook.jpg.png.html]

[/URL]
Seriously though. These sort of people aren’t worth the time. Sometimes people will go into Exhibition and be buttheads (read, the “Exhibition is full of jerks!” thread)

To be fair it sounds like you were playing Kan Ra and he is indeed rage fuel, Glacius too if you jump back and fireball entire game. The snipes man.

On a similar note, I faced a Shago that would only run away and throw fireballs. It was a problem for my Sadira at first but then on the second round I just started blocking and waiting for him to come to me instead. I won and he had the nerve to say my Sadira wasn’t even good even though all he did the entire set was run away and fireball. I don’t ever reply to people using my mic but for the first time in ever I got mine out and said “COMING FROM A SPAMMING SHAGO” come on bro. Now that I got that off of my chest, why does Shago get meter from me blocking his fireballs and get decent chip damage. Even if you play it safe he can still easily get at least 15% off of blocked fireballs from one side of the stage to the other.

I’m really hoping you reported that guy. It’s times like these I wish we had emoticons in Xbox chat… and a salt shaker one.

you can use emojis if you have smart glass

he couldve shadow leaped through the hail but decided to keep rushing down without grabbing and like i implied in the message, he kept guess breaking

lmao youre preaching to the quire here. the last topic i made on here was about spamming shago players.

I’m really hoping you reported that guy. It’s times like these I wish we had emoticons in Xbox chat… and a salt shaker one.

Might be worth slipping into someone’s notes for the next meeting?

On topic, I don’t know about Exhibition, but I haven’t had these issues lately. I send out GGs in Ranked for good matches I’ve had and the worst I get is no response occasionally. People can be douchey and that is why there is an option to report them for such behaviour. It does need to have more visible repercussions though, because as a deterrent right now, it isn’t much.

I ONLY do Casual Play too. I either play locally with friends, or play Exhibition for fun.
I think it’s more fun than taking things too seriously, it is a game afterall.
Feel free to add me GT: KrizmKazm

I encounter this types probably 75% of my time in exhibition and 90% in MKX exhibition. the salt is even stronger in MK X.
Ive noticed that if you “fight back” they get mad! If you dont fight well they boast about it. Either way they troll!
I ran into the biggest douche ever in MKX the other night…OMG he was an idiot.

He ran his mouth for 30 mins all the while packing his bowl and coughing up a lung…bragging about his weed from Colorado! He didnt know I was listening until I finally had enough and just went off on him.
I reported him and blocked him…I hope MS banned him becasue he was a fool.

He couldn’t beat my KANO but when I changed characters to have a bit of fun and try out some one I wasnt good at and give him a chance…he beat me and you would of thought he beat Sonic Fox…he was talking me down like crazy. PHPPHH friggin idiot…I feel sorry for these types of people…its sad

I recently made a post somewhat regarding this type of encounter in the “Exhibition is Infested with Jerks” thread. I often encounter people who are beyond salty and send me various vulgar message. It only happens every so often because Jago isn’t really a gimmicky character that is hard to beat. But when I do win, the response is usually salty and telling me how Jago is the easiest to use and cheap and overpowered, blah blah. Ah Exhibition.

UPDATE on super douche bag I mentioned above!!
When I went home for lunch I had message in my Xbox profile…from Xbox: Thank you for making Xbox live a better place. We have acted on a report you recently made blah blah blah…

SO the dude got suspended LOL ! glad because he deserved it! I was suspended once and I learned my lesson but I didn’t do anything near as annoying as this guy did.

As Kano would say: “Sorry 'bout that mate!”

@TempusChaoti FYI, he was most likely suspended

UPDATE on super douche bag I mentioned above!!
When I went home for lunch I had message in my Xbox profile…from Xbox: Thank you for making Xbox live a better place. We have acted on a report you recently made blah blah blah…

SO the dude got suspended LOL ! glad because he deserved it! I was suspended once and I learned my lesson but I didn’t do anything near as annoying as this guy did.

As Kano would say: “Sorry 'bout that mate!”

JUSTICE!!! lol, anyway glade to see you took care of that my friend.