Im not sure if im just rusty because I just got back into the game after a hiatus, but it feels like Sabrewulf just sucks. Hes bad enough that I honestly think the devs hate him and maliciously and purposefully nerfed him from his season 1/2 highs so he could be bottom tier.

its honestly a travesty- I remember when the argument could be made that Wulf was the top character in the game or close to it. Now I don’t think hes good enough that any player who actually wants to be competitive would consider using him.

This reads as if you are trying to play wulf with special moves only and are frustrated his viable playstyle is not doing jumping slash and it working (when it would in S2). If you dont believe in the character then switch

The devs hate my character conspiracy theory is… Quite the leap in logic. Wulf is perfectly viable. I wouldn’t call him top tier anymore by any stretch of the imagination but yeah, some of his stuff in earlier seasons was a bit OP (especially his instinct) and I say that as someone that mained him in season one.

I’m far too busy to dive too deeply into this one, but as a Sabrewulf main since Day One, @DarkSpartan858 is part-right!

The big, glaring problem with Sabrewulf is his unique Instinct Mode. While everyone else’s Instincts are passive boosts that enhance your game, Wulf’s is a new very situational move that really only helps more experienced players who understand how/when to Feral Cancel. The bonus chip damage in Instinct is… ok, but it isn’t a real game changer, like Glacius armor, Aganos clubs, Spinal’s dura-skulls, etc. 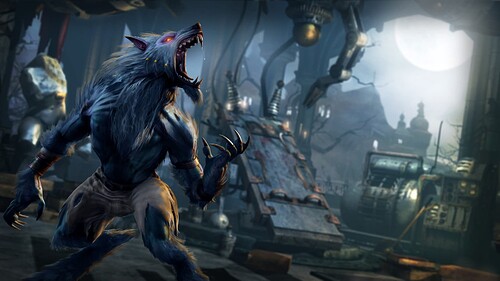 That doesn’t make Sabrewulf trash, but he really does have the game’s worst Instinct! …but how could we fix it?

I don’t agree that the devs dropped the ball with Sabrewulf. If you have ever seen the likes of Flash, Roman, or Paul B you can see that Sabrewulf can still shine. Yes, you can’t play Sabrewulf like you did in S1 and S2. He is no longer a yolo character (Remember Acid Glow’s youtube vid “Nerf the Dog”) and does take a bit of extra work to play competitively at a high level. Sabrewulf does have a few bad matchups, but those are the same bad matchups he had since S2. Any character that has strong zoning is going to give him trouble, but that is fine. When he is in your face, it’s scary. Sabrewulf has some pretty amazing buttons and Overpower is one of the best moves in the entire game.

In respect to his Instinct. I think it far from the worse Instinct in the entire game. It’s an instant reset button that allows him to make every attack safe, allows him to chain manuals, and frame trap you to death, is pretty good, but it takes work.

Are things harder for Sabrewulf in S3… yes they are. Being a lower tiered character doesn’t mean he is bad. In fact at worse even the lowest of tiered characters are still on average a B- Tier.

I would place Sabrewulf as a solid B Tier character, with Sadira and Orchid coming in at B-.

In respect to some of the wacky balance issues happening now in KI, has a lot less to do with IG and more to do with MS no longer supporting the game. Much of the problem characters right now are in the S3 cast and some stupidly buffed S2 characters. I strongly feel that MS should allowed IG to stay on with KI for at least another year or two to at the very least fix some of the broken things in the game, and or remove Shadow Jago.

In the end, I think Sabrewulf is one of the best-balanced characters in the game, along with Jago and Mira. Yeah, he doesn’t have anything too flashy, but he doesn’t need it.