Anyone wish what will come of Injustice 3?

I just hope Superman gets redemption for his actions. Imagine if the Black Lanterns appeared, Lois Lane is resurrected as one, including his unborn child.

Would that be a good story?

And what characters would you pick for that?

Not sure about story, although i’ve always been partial to the idea of the Crime Syndicate. As for characters. I’ve gotta be boring and say John Constantine, Beast Boy, and Static. Also, Martian Manhunter, Lex Luthor, Shazam, and Killer Frost need to come back. Sideways would be cool if they wanna use a newbie.

As for guest characters, The Power Rangers, Judge Dredd, Spawn, and X-O Manowar would fit well.

Theres going to be an Injustice 3 ?

Yeah I don’t doubt that but… I though yall would be excited about MK11… isn’t that how NRS operates ? They alternate between the two.

I honestly don’t think NRS’s next project will be MK11 or Injustice 3. After all, if it was just another installment in one of their franchises, then why would they be taking so long to reveal it. No. I think they’ve got something else up their sleeves. Some new fighting game IP.

But, IMO a third Injustice and an 11th Mortal Kombat are both inevitable. So, I’m gonna be thinking about both in the mean time.

Have they ever made something other than those two Franchises ?

If they’ve done it before then they can do it again… if not… then theres always a first time for everything.

Ed Boon gave a soft confirm for MK11 back when he was interviewed in an event in Brazil a little after Injustice 2 DLC was done. He was asked if MK11 was on the horizon and his answer was something along the lines of “we’ve had MK9, Injustice, MKX and Injustice 2. Based on the pattern, you could probably guess what’s happening next.”

Or something along those lines.

Obviously plans can change, priorities can shift, etc. But MK is a substantial money maker and if anything, it seems to be on the rise again since the move to WB and MK9, so it’d be pretty surprising if they came out and said “surprise! Here’s MK vs DC “ or even Shaolin Monks 2 for that matter.

We’ll see. I’d love it if we finally got a reveal / tease at The Game Awards in December. They’ve been so quiet, which is amazing given how far past their usual announce time they are. Who knows, maybe it’s a much bigger project this time around? Maybe this story mode is far bigger than anything they’ve undertaken and that’s what’s slowing things down? Maybe they’re just trying to shorten the lead-in time to their normal release schedule?

Anyways, as for Injustice 3 (aka the actual topic), I know this won’t be popular, but I’d love to see a game set entirely in the Batman / Gotham universe. All allies and enemies of Batman, with a dark, massive story told from multiple angles.

They could even throw some of the real randos in there and really shine them up the way Rocksteady did with some of the lesser known characters.

As far as the plot, I could see a cool take on the war of jokes and riddles where villains are forced to take sides in an all out war and Batman’s more or less caught in the middle, with other characters specifically targeting him or other villains and they have their own motivations, etc.

Only if it’s a spin-off and doesn’t hinder the existence of an actual Injustice 3. A Batman Fighter could be cool, and it would be a good way for people to get these characters out of their system and finally have the main series roster be a little more balanced, but I will always want a big DC Comics crossover game instead of just focusing on one franchise.

I get about mortal Kombat’s status. It’s just would feel like a letdown, to me at least, with all of this added time between the reveal breaking their usual pattern, if all they revealed was just another Mortal Kombat game. It feels like they’re doing something special.

How great would it be if they were making that slasher/horror movie Fighter everyone wants them to make, and the reason the announcement is taking so long is that they had a little trouble securing all of the licensing, so they’re a bit behind schedule. I don’t know. A girl can dream.

Playable Grayson’s Nightwing.
That’s all I ever wanted.

I just want more unique movesets to work with, Injustice 2 felt too samey with most of the characters having similar stuff to the first game (even the new characters had some degree of overlap with the returning cast). I really don’t want this to end up like Tekken 7, which honestly feels too similar to Tekken 5 in many ways (which is over a decade old at this point).

How great would it be if they were making that slasher/horror movie Fighter everyone wants them to make, and the reason the announcement is taking so long is that they had a little trouble securing all of the licensing, so they’re a bit behind schedule. I don’t know. A girl can dream.

With the silence that NRS has had I actually thought something very similar when I saw this topic, though I also had other ideas that NRS might consider (one recurring thought was a dark sci-fi/future world for example). Gonna be honest, I would be fine with a new IP if it got as much time and effort as the mainline IPs.

Playable Grayson’s Nightwing.
That’s all I ever wanted.

As long as they don’t push edgy DmC Grayson I’ll be fine with this. And mind you I’m not bashing DmC, but the tonal shift of the new Titans show feels like DmC Dante in many ways (except I actually like DmC Dante). Canonically they could just do what they did with Green Arrow (and Power Girl, and Sub-Zero, and the TMNT, etc.) and have a Grayson from an alternate universe come into this one. 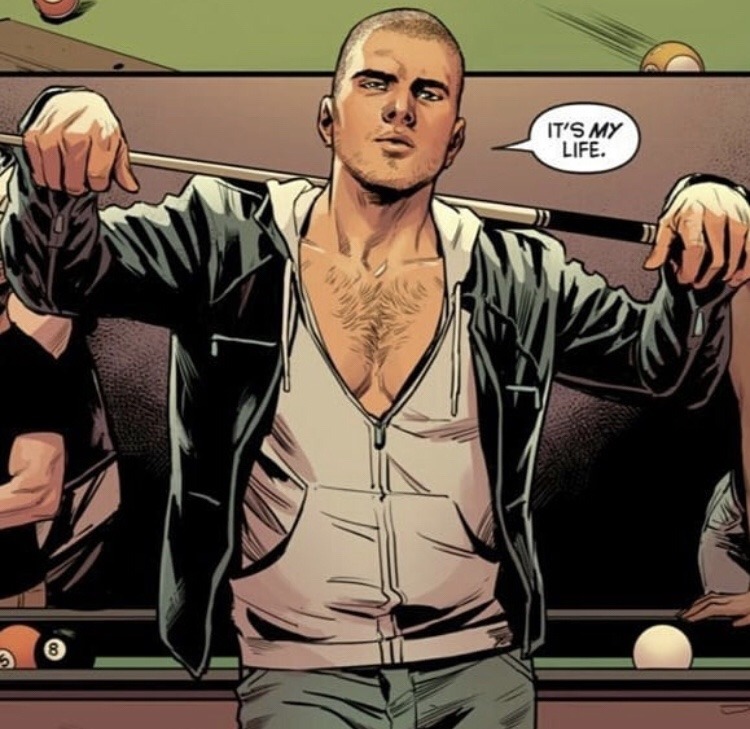 That’s Richard Grayson. He got shot in the head, but survived, woke up with amnesia and a shift in personality. To differentiate him from the Nightwing we know and love, he is called Ric.

You know what I want… That ■■■■ Comman Throw Input to be removed and a more consistent Input Buffer… as for the Characters… I’m down with whatever !!! HIT ME !!!

I have no idea what you’re talking about.

. Its Super Combersome and Unnecessary.

I mean. I just use the brackets to grab.

on the back of the controller. above the triggers.