The versus screen for example was so much better in season 1. The colors were strong and vibrant(black, red and white for text) making everything more clear on the screen: 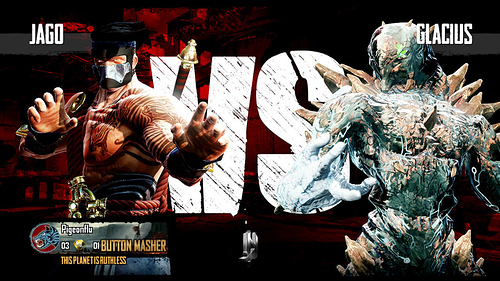 IMO the real improvement in season 2 interface was the character select screen: 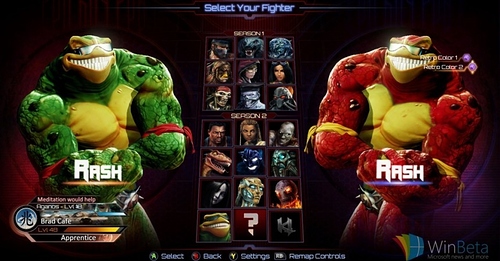 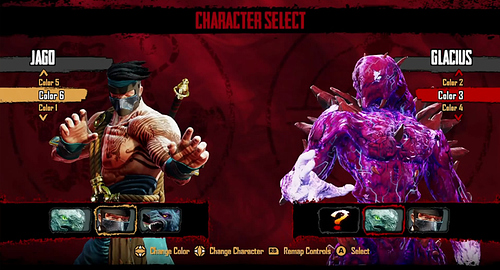 The ingame HUD could use some heavy adjustments/changes. 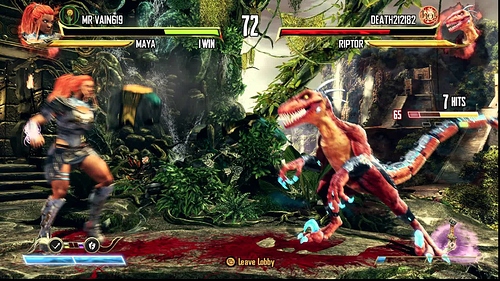 I agree that the UI needs to be improved.

I actually disagree on both counts with what was better (per your post), but I respect your opinion none the less.

For the select screen, I think that Season 2’s sort of angled grids, where the tops were kinda tilted back, cut off by seasons, looks kinda wonky and could use a more sleek and streamlined, perhaps flashier, stylized design. I also find it odd that some of the 3D models appear closer to the screen (TJ) than others (Aria).

Season 1’s might be a bit more minimalist and rather unfinished looking, with some Street Fighter-esque paint splash design (which I’m not a fan of at all), but it has a more vibrant and fluid design. At least to me.

Either way, I still think that the select screen needs to be improved upon. More going on in the background, such as rolling clouds, lightning strikes etc, quicker load times for the models, better cursor movement… Just more flash and bombast overall that makes it feel like you’re playing KI. I’d say MKX has the character animation part right. Something like that would be cool as well. The more signature character moments, the better, as far as I’m concerned.

As for the versus screen, I didn’t like season 1. I wasn’t a big fan of the screen turning black and white, the gigantic, intrusive VS symbol in between the characters, and all the wasted space.

Granted, there’ still wasted space in the Season 2 design. I also don’t feel like I need to see my profile icon/info on the versus screen. To me, this should be the pre-fight hype moment.

I’m not normally one of those “it has to be like old KI” people, but I’d like to see them go back to the original arcade KI for inspiration on the versus screen. No more having the characters appear on screen, freeze immediately, and then have me stare at a near silent screen for the 5-10 seconds it takes to load the match.

Have a sort of FMV style intro of the character. Like a camera starting just above a missile and following as it’s shot from a helicopter in to Orchid’s stage. Just before it hits, have a highly detailed Orchid dive out of the way and draw her tonfas, with the camera panning from them, up to her face with an angry, resolute expression on it.

You have that on one side, and then on the other, you have a camera quickly panning through a dark forest, through a metal fence, up to a mansion and up to it’s balcony, where a highly detailed Sabrewulf is howling at the moon as the camera pans up to his face and his shining eyes.

As that’s happening, A glowing neon “V” appears between the two FMV sequences and sprays light above, below and around each sequence as the announcer says “Fight on”

To me, that gets me way more hyped than staring at frozen images of the characters in-game models. Like I said, use this loading time to hype me up for the match. Don’t just reuse the character’s moving in to the camera animation that I just saw on the select screen.

Some interesting points here. Like the OP, I think I like the original VS screen better in terms of simplicity and style (although I like how smooth the S2 version is with load times as well as how it shows the stage. Personally, I would simply have the 2 characters show up (fully-modeled, not images) with a screenshot or moving background of the stage behind them taking up the entire space (rather than just some weirdly bad pixelated circle with a V/X going through it). I also suggested in another thread that useful info could be added to this screen. Granted, this goes against what Jago407 wants, but I digress - I think it would be cool to see what platform my opponent is on (Xbox One or PC, what type of peripheral they’re using to control their characters (controller, keyboard, or fight-stick), where they’re from (by country), they’re connection speed/strength, disconnect %, etc.

I’d be down with the opinion to toggle that information into view if I wanted to see it, and if o were fighting online, I think I would like to know that info. I’d also add connection speed / quality, maybe even other stuff like online W/L record, online record against your chosen character, etc.

But again, I’d want this to be optional. I’d personally want to keep a cleaner screen offline.

I think I would be okay with the info being optional.

What i think would be nice would be a legacy UI. By that i mean an option to choose between Season 1, 2 and 3’s Menu’s and overall UI. I’d love to go back to Season 1’s ‘Press Menu’ screen for instance.

I’m not too sure the in game UI needs adjusting. Think it’s pretty flawless, no major changes to it any way. The versus screen, character select and main menu all need adjusting. Looking forward to what season 3 brings to the table. Hopefully it’s nothing like what we got in S2.

Wish IG went back to Season 1’s font and color scheme (Red, Silver and fire) … but other than that, S2’s menus and character select screen are better.

While I agree the presentation could still use some improvements and more hype, I prefer S2’s over S1’s. I think S2’s menus and screens look sleeker in just about every way, and that S3 should stay closer to them.

That would fix the only problem I have with them. The closed eyes making derpy faces.

This is so perfect! Great vision.

In terms of character select I’d rather they just keep it a simple vertical layout the way it is now, preferably without all the season labeling and have them just be connected. (Honestly not a fan of everything being labeled by seasons.) It would be nice if they put Season 1 Season 2 Season 3 on the right or left side of the boxes rather than breaking apart the character select. Something like this. 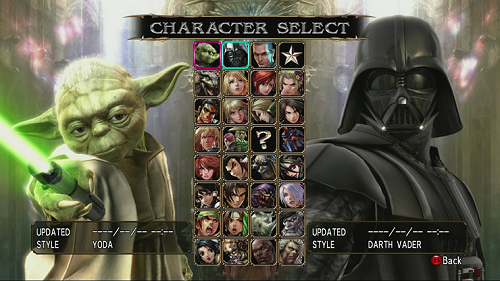 I spent way too much time in Soul Calibur 4. I’d say the vertical layout allows for better viewing of character models, and something they should keep. The Season labeling should be removed completely from the selection screen when in modes other than the store/customization screen.

The reason they are broken up into seasons is so people know what characters they are buying if they buy S1, S2 and eventually S3 ultra/combo breaker editions

The reason they are broken up into seasons is so people know what characters they are buying if they buy S1, S2 and eventually S3 ultra/combo breaker editions

Yea, the tags may make the organization a tad Messier, but it makes sense. Really don’t think they should be removed, would be confusing to new players.

I don’t particularly care what it looks like, but the lag is unforgivable. Why you’d want to immediately introduce prospective players with “yeah we didn’t program this very well” is beyond me. If the rendered images are too taxing, use artwork.

Here is a couple of redesigns I saw on behance. I wouldn’t mind if the redesigns went like this. 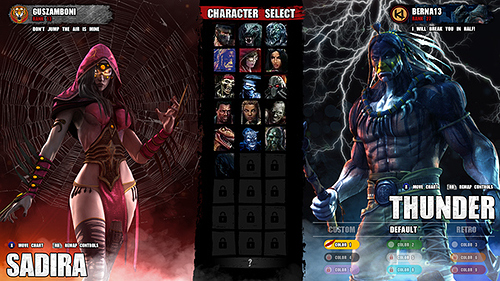 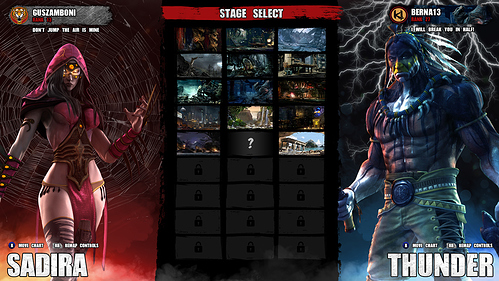 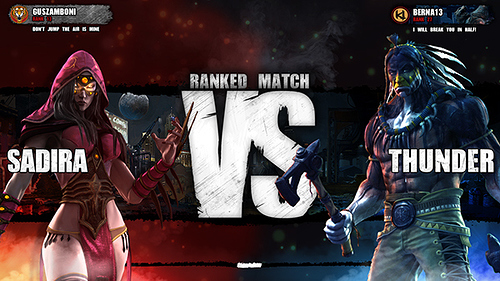 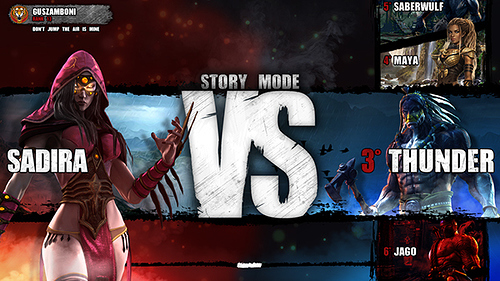 wow that looks incredible, i just think the aged edges should be replaced with the share ultratech ones we have now.

The Backgrounds and colour scheme are incredible well done and IG should really think about this if the UI is changed for season 3.

The VS screen is the one that really stands out the backdrop behind the character renders works excellently. the only dislike i have is the jagged edges and the Player Icons are back tot he way they were in season 1 where i prefer how they look now in Season 2. however i do feel like the season 2 player cards need to be opened up more to show off the artwork in the Background of them. good stuff I’m thoroughly impressed .

Wow that does look nice overall, I would be concerned about using images rather than the renders. How will I know I picked the right costume/color if it’s only showing default images?

Those look great, specially the backgrounds for each character. There is the concern of not being able to see your alternates if it’s just images, but I’d trade that for a faster select screen, personally.