At the start of his ultimate he throws a really tiny pyro bomb which will stun the opponent with little ember flakes then transforms his upper body into a giant Inferno cannon that blasts the opponent with a massive inferno. After a second, Cinder turns up the heat even further, blowing the opponent away! Resulting in a 19 hit ultimate combo!

here’s a little picture of what i could look like 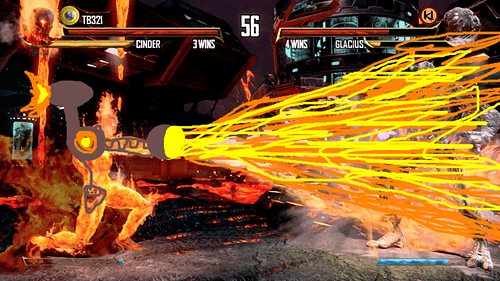 I really hope the “hits” is removed when ultimates comes out. I want the ingame hud to disappear for ultras, stage ultras and ultimates.

For cinder’s ultimate, lets go retro and use his no mercy from KI1. That mini lava pool that swallows the opponent and closes up.

We need a sound cue !

Very nice. Not too shabby either

I think Cinder`s ultimate should be him taking off his mask and blast opponent away with nuclear energy. That would fit into his lore (he wears a suit that contains his energy so he wont destroy, like, everything.)

Assuming Cinder ins’t one of the intial 5 in the next pack, yeah I can see that coming

Just like the original KI. I want it to sound ominous.

Maybe have a heartbeat in the background as well and have it go deeeeeeeeee on the final hit lol it makes sense in my head.

I think Cinder’s ultimate should just be a big ripoff of Akuma’s Raging Demon.

I get what you mean, don’t worry.

I’d like for sticky bombs several giant ones followed by an inferno with a giant explosion!