I noticed that KI has some anti-attention curse over itself

I am observing it on youtube for a long time.

When some unpopular channel has KI videos, it has very few views, almost none.

When some popular channel has KI video, it has significantly lower amount of views than other FG related videos.

Like latest cross counter video about KI has 21k views, and even their Rev2 video has 33k…

This is just anecdotal, but I was talking to a guy earlier that used to have the SNES KI, and noticed that KI3 was a thing and downloaded it, but was then put off because he said first thing he was thrown into a tutorial (my guess is he started with Shadow Lords), and he just wanted to play the game to see what it was like, and it was somewhat off-putting to him. I mean I can kinda relate. I hadn’t played a Final Fantasy game since 10, and I tried a demo of 13, I believe. And nearly first off they threw me into a long-winded tutorial and I started having flashbacks to 8’s overly complicated battle system and was like “oh, hell no!” and dropped it right there. 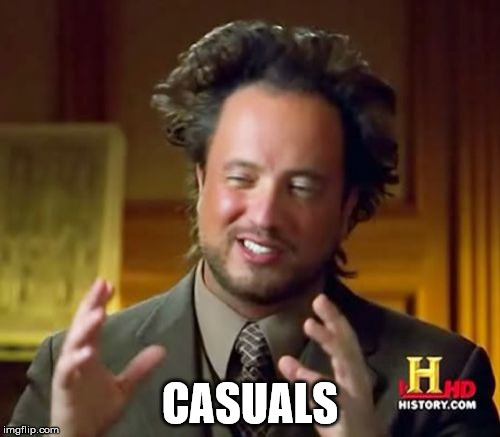 I think it’s more a matter of making a good first impression, making them feel like it’s not going to be an uphill battle from the get-go. It’s a delicate dance of hand-holding and freedom to explore. KI…Well, it’s hard to say if that’s been presented well in this game.

Sometimes tutorials are fun, like in Farcry Blood dragon.

Like latest cross counter video about KI has 21k views, and even their Rev2 video has 33k…

The KI cross counter video just came out and its a week behind the Xrd video. It doesn’t mean that much. But either way, that channel caters to a capcom audience. They’re not going to be as interested in anything else.

That and what @Supermariofan20 said.

That gif perfectly demonstrates how I am/feel when I come back to the forums for news.