How can we keep the momentum going Tournament wise?

Not sure if you guys have noticed but KI tournaments are still going on and unfortunately are still having low turn outs. Combobreaker registrations have just started but it doesn’t seem like many people will register for that either.

That leads me to the topic at hand. How do you guys propose news on new tournaments should spread? I haven’t played KI lately but I remember for a while the KI Meld would direct you to tournaments. Wonder if it still does that and shows people how to register. A new way I propose MS and the IG peeps to promote the scene is by borrowing from League of Legends again.

I’ve said it before and I’ll say it again, KI borrows a lot of elements from mobas like League of Legends and why shouldn’t they, it’s the most successful game and esport on the planet. I think how they promote their game and esports scene is genius and makes sense for the PC port.

The main log in screen promotes a new character or skin, which they should def do but that’s beside the point. 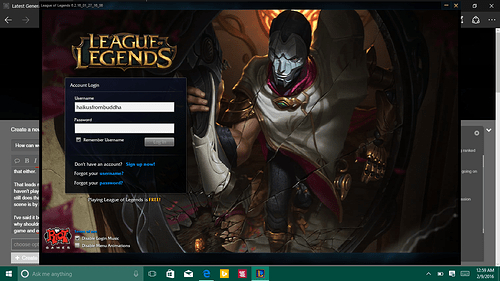 The real discovery comes from their main page. Unfortunately they are having a Jessica Nigri segment on the shot I got but they usually use that space for Esports and usually link to an official stream to watch. Now am not saying this UI will work with KI but man have you guys even taken a second look at the current KI menu. Their are so many sub menus and at times it’s hard to find something you are looking for especially if you’re new to the game. Trying to find practice mode for a new player requires diving into multiple menus just trying to find it. Overall the main menu needs an overall revamp/simplification. Hopefully season 3 delivers in promoting the KI scene. 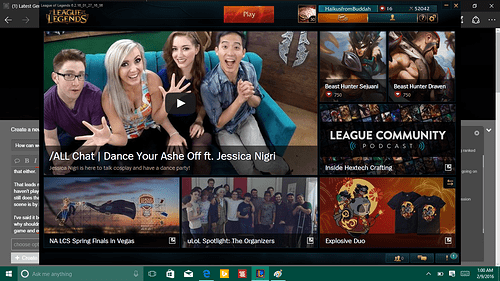 How do you guys think the tournament scene can be shared?