How can I improve my PC? 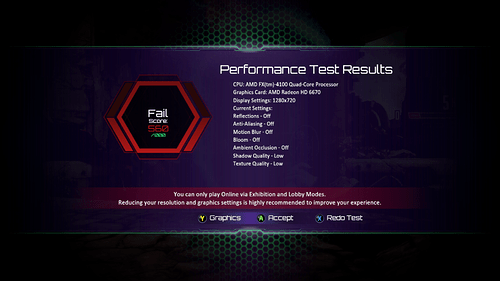 It’s gonna be your graphics card that’s the bottle neck.

Make sure KI is running into your graphics card (AMD), not your native GC(intel…).

I had the same problem before running another game on it.
Make sure (at 100%) that KI is running into the GC you wants.

Edit: i have a similar config except that i have a NVIDIA GC.
Locked 60 FPS and 1600x900 with high textures graphics only.
The rest are low and disabled.

How do I do that?

(And I don’t even have an Intel CPU…)

Your 1 gig card is the thing that’s killing you. I highly recommend you browse Newegg and find a better one. Try for minimum 2 gig. If you can get one stronger than that do it but please make sure your power supply Is capable of handling it.

I’m not familiar with AMD’s graphics card application is I think Catalyst or something like that. There should be additional graphics options you can turn on and off in there. You can also try a game booster program, I can’t recommend any one in particular because I’ve never had to use one.

It’s definatly your graphics card that does it… If I were you I would buy a nVidia GTX 960 (or an ATI R9 380 if you wanna stay with ATI) or above… It’s just above the recommended specs and should run everything on high at 1080p, with still a little extra power to get from

Of course you can buy a cheaper card and just get around the performance of the minimum specs, but then you’re also gonna have to upgrade again MUCH sooner… and you won’t be able to max out the settings
But if you insist on that it would be a nVidia GTX 950 or ATI R9 370

Your GPU is significantly weaker than the minimum system requirements:

There’s not much you can do about this other than lowering the resolution even more until you are physically able to upgrade your system.

Yeah, I always thought that the higher the numbers (i.e. Radeon HD xxxx), the more powerful the graphics card is. And that’s funny, I swear the minimum requirements specifically say “or AMD Radeon HD 5850”.

For example: The first digit(s) indicates the GPU’s generation, and then the following digits indicate the GPU’s class (Low/mid/high end). Using Nvidia, comparing 6xx GPU’s to 7xx GPU’s will find the 760 is newer than the 680, but the 680 crushes the 760 because of the class difference (80 vs 60).

This also applies to AMD GPU’s as well. Here you have a direct comparison between the minimum AMD GPU (5850) and the the one you have:

As you can see this is your system’s bottlebeck since the 5850 is more powerful than the 6670.

Yeah. What @Jarriaga89 said…
For the last MANY years, all graphics modelnames has been.

First number = “generation” (not really, but the higher the number the newer)

Second number = Class (Budget, Midrange, Highend & Enthusiast) of which the highest number is the strongest

I tried running the PC version but my PC is nowhere near the level needed to enjoy it on a basic level. I would have to replace my CPU and video card and add more RAM etc. Would be better off just getting a gaming PC lol