Finding a Use for Shadow Air-ORZ

i would love to give input on this but ill be honest with you @STORM179, i never use shadow ORZ because i just dont see it as useful. id rather spend meter on doing shadow damage ender, or doing shadow ORZ to use as counter breaker bait 50/50 to mind fuckk opponents. her wallsplat throw resets with full wrath, mid combo japanese influence resets, all that stuff is too good and easier to do than havin to set ppl up for TK shadow ORZ. yeah its cool, i seen a few vids on the ultimate fans FB page, but its too slow for me.

i have hisako as my strong 2nd to my Fulgore fugbot main. there are days where my execution is total crap because im either tired from work or other activities. hisako requires a degree of execution sure, but with how i play her its far easier to me. its just a matter of timing, though i really need to get off my As$ and start doing TK ORZ instinct shenanigans on people. i know the set ups, but i keep whooping ppl with middle of the road advanced tech with her thus causing me to stagnate in that dept. her influence at full wrath resets are just so good,and if somebody is expecting simply jumps up thats perfectly fine because they’re hit with my flip out tech lol.

stuffing TK shadow ORZ at this time is too much trouble for too little reward. her S2 tech is still quite strong at least for me, but my experiences in the game are different from yours. you probably fight alot more difficult opponents than i do on a more regular basis than i, our sparring session at least gave me that assumption considering how tough you were.

That’s the thing though - I don’t actually think this is true to be honest. Even at high level I’ve found that a mix of command grab and anti-jump out resets works really well. I do think instinct TK’d ORZ’s are probably the better pure damage option if you aren’t confident in your read/conditioning on them for a reset, but there’s an amount of setup and time required there that can also make this prohibitive I think. I feel “optimal” Hisako play will probably utilize both - the air-ORZ shenanigans when the opportunity presents itself, but also liberal use of her other options in instinct. Pure TK ORZ->stagger combos take up too much instinct time to be her best option in a lot of situations.

I use it quite a bit, but only in the corner. After I do a wall splat, if I anticipate them to jump I’ll do the heavy On Ryu Zan into air light punch for the flip out. Now if I fight someone who jumps non stop, instead of doing a ground mix up after they land from the flip out. I’ll just do the On Ryu Zan again but do the Shadow air On Ryu Zan because they’ll more than likely break the air light punch. It’s a great punish for people who don’t respect Hisakos corner pressure.

Here are the hitboxes for all versions of air-ORZ, performed as TK’s in the corner. You can see how they conform more or less to the above descriptions that I gave. 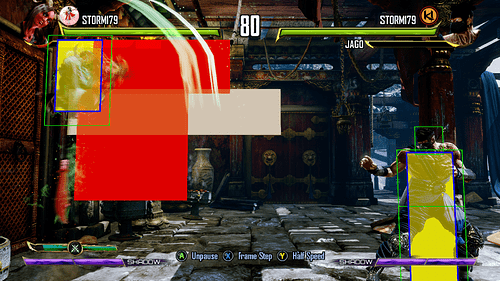 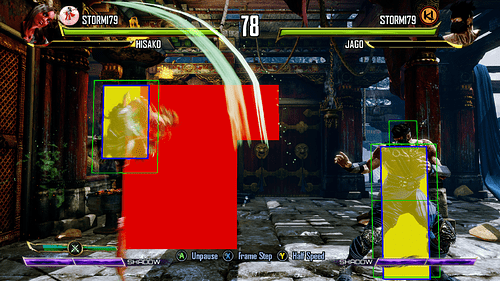 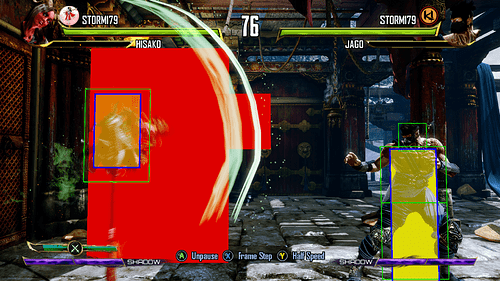 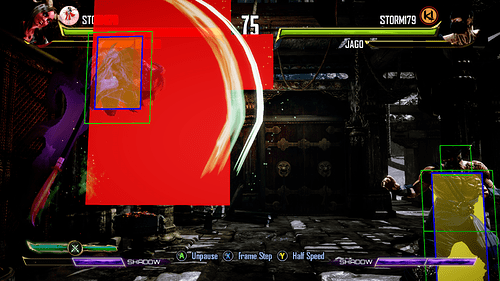 Shadow Air-ORZ.png1920×1080 1.77 MB
Shadow air-ORZ’s hitbox is a bit deceptive, as it is seen when zoomed-in from the shadow activation effect. You can tell from the width of Jago’s yellow “presence” box that we are still zoomed in, even here on the last active frame of the move. I am pretty sure that heavy air-ORZ’s hitbox is slightly larger in comparison.
1 Like
Marbledecker May 20, 2016, 6:44pm #19

Holy moly, I love this thread.

I really only use this for a wrathless recapture and as STORM mentioned, in the corner after wall-splat as an addition to the mix-up suite. I would likewise classify this option as “OK but not amazing”.

Might as well just make it the whole screen at that point.

Might as well just make it the whole screen at that point.

Lol. That’s a lot of hitbox. No wonder I get hit from Space fighting you @STORM179. Seriously. XD

Lol. In her defense, that move’s got 27 frames of startup. It’s not like you can really use it in neutral. It’s pretty much an oki or instinct-only move.

After combo breaker this year I think I’m done with KI and Hisako. I’ve put in wayy too much time and effort into her just to keep coming up short. The shadow air ryo zan is damn near useless, she has no launcher ender, minimal juggles, among other things… Maybe I’m just salty now but seeing characters with safe dps, unpunishable openers, and endless pressure tools just makes me want more for our ghost girl, she has to work way too hard for combos and setup. Ok rant over.

Meh. While I do think that Hisako is a character who takes a lot of work, I very much do not think she is in any way underpowered, not even at high level. I thought this was true in S2, and I think it’s even more true now in S3. She doesn’t need more juggles, a launcher ender, or even a DP (which would make her broken) - she’s a very, very good character in her own right. Good meterless damage, great reset potential, and a really good combo trait as well.

She does take work, and she’s not Top 5 or anything, but Hisako is a monster of a character when played well. I can definitely sympathize with the struggle (cause damn, she does take work), but she’s really good.

You’re definitely free to switch characters (or even quit KI, though of course we’d prefer you to stay

) if you feel like it’s not worth it or you’re not having fun. But felt like I had to defend my girl

I think I’m gonna stay with her, I just had a bad night in ranked and was ready to drop her. But things got better today, when she is on, She is very hard to beat. Back to the topic of the thread I use to only use the shadow air ryo zan as a recap after wallsplat ender-juggle with heavy on ryo zan, linker then and ender, but that was hardly worth the meter since it’s so easy to break. I also wish it was projectile invulnerable. It would crush glacius shadow hail

I also wish it was projectile invulnerable.

Me too. That would give it quite a few more MU specific uses. It honestly seems like it should be.

Really? That seems like a super specific property to wish for. Just about the only situation where this would be useful would be against Glacius. It doesn’t have much “travel” to it and is fairly slow, so it’s not like you’d ever use this in any neutral situation to blow through a projectile - you’d just use shadow ORZ instead. Regular air-ORZ clears most fireballs easily enough, so I don’t think this would be much of a buff at all.

Now if you wanted to buff the move’s post-flash startup…THAT would be a buff worth talking about.

Hmm. We’ve got Sadira and Kan-Ra who like to toss projectiles in the air, seems like those would be MUs might benefit from it as well.

Or it could just be one of those “hey the grounded version is projectile invincible so my brain expects the air version to be too” kind of things.

I can see it being useful in the Sadira MU as a hardcore punish to widow’s bites, but I don’t think she needs it against Kan. That “one aerial action per jump” nerf means that if he’s putting up a scarab in the air, you should be using descent to get behind him and punish, or at the very least force him to get defensive again at a range he’d prefer you not to be in.

Yeah I can agree with that - if Kan were to spit scarabs at you in an air-to-air situation, then the projectile invulnerability would definitely come in handy. Same with Sadira’s shadow projectile - though oddly, I’ve beaten that on reaction with Shadow Air-ORZ, probably due to a difference in startup frames.

It would also be helpful against fulgores that pop hype beam on jump. It would decrease some of the damage she takes.