Since I was unable to get a fightstick in my country a friend of mine made one for me.
I did the template and he did all the rest. I finally got it today!. I started playing a bit the older KIs because my muscle memory is better there, but it was a surprise that I went to the new KI and I could perform almost all the combos with Sabrewulf (I need to practice the cancels though…)
Buttons and stick are sanwa. I used to play at the arcades in the original one, so I’m not used to this stick/buttons. They are responsive, no doubt, but I have some difficulty witth the DP. I need to figure it out to get it better. It’s funny that when I played at the arcades I was better when playing in Player 1 position, and here I have the same thing, while playing on the joystick that wasn’t a problem, lol. 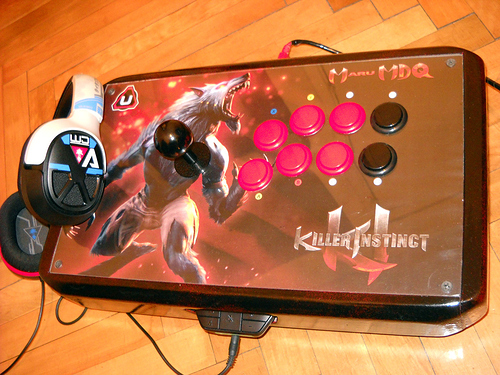 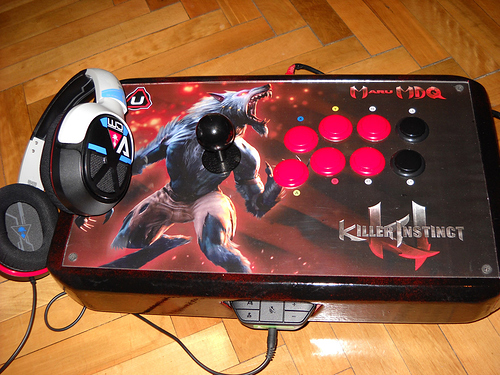 square or hex gate on your stick? If it’s a square gate a short cut for dps is a dash motion to the corner of the square.

He asked me which I prefer, I went for the square One because I’m used to that One. By córner you mean the diagonal? I’m doing forward, down , diagonal, but I used to do different

down-forward twice as if you’re dashing is what he’s trying to say.

Octogate all day, unless your a wulf player.

Wow! Congrats dude! That’s cool. If someone gave me a stick, I’d try it out, but the prices for a stick are steep…

For DP motions, try this - Walk forward then fireball, but hit the punch button too early.

Looks awesome! Good work on your friend, he did an incredible job. I wish I was good with a fightstick, sadly I never got around to figuring it out. I have a Razer Atrox and want to print a Jago template to put it as the display, maybe change the buttons so that they are LED colors. I need to get around to playing with it more, especially since it was like $200.

At the arcades they were four. He offered me octogate but I was afraid I would not get use to it (they say is too sensitive…or something like that). I’m Wulf player since 1994 and I’m feeling very comfortable right now, but I’m struggling a bit with dps. But I just tried the stick for 2 hours XD

I think the same, I wasn’t sure to buy one until I could test some in a fighting game event. But I didn’t play, I got to test the feeling of the AS, like the stick and buttons, andit reminded me of the arcades. I wasn’t convinced by the ball top stick (was used to bat top) but after trying a razer I decided I would go for the ball top =)

PS: When I made my mind to buy them nobody could bring it from the US, so I tried to get them from here (it would cost me three times the original price, it was mad…). But they told me there was a chance it got “lost”. So I said “no way”.Until a friend told me he does fightsticks with sanwa parts and gave me the option.

lol, that’s what I’m doing currently to get it right. I’m going to practice right away XD

Thank you!
I told him that I liked the razer style so he went for that design, but a little more rounded. It’s cool to make your own template (I work with Photoshop) And if you are into modding, even better =D