Feedback: Improving the game and making it more consistent

I love to play this game but I feel there are some things that could be improved upon and I decided to list them here. These are mostly nit-picks and minor annoyances that don’t detract from the overall experience but are enough to grind my gears.

Change music selection order - I have no idea what order the music select is supposed to be in, if any. Here you have Sadira (S1, new), followed by Hisako (S2, new), then Sabrewulf (S1, old), Arbiter (S3, new) and Glacius (S1, old). What type of order is that? Personally I would prefer to have it in alphabetical order as that makes the most sense, especially for people who might not know in which order the characters released.

Add music selection sub-menu “Classic” - I’ve already seen some people talk about this one. While fixing the order the songs are sorted by, you could add a sub-menu in music select titled “Classic” and add the songs you can choose in Practice mode, aka the songs from KI1. This would be nice for the people who have unlocked those songs and would make them more useful than having them stuck in Practice. And while you’re at it, you could add the songs from KI2 as well. Sure, this might need some tweaking with unlocks and such, but it can’t be too hard to implement, right? And regarding the order, it could be Default, Random, Classic, then all the characters, and of course this sub-menu should also have a random button and alphabetical order.

Lower transparency of green smoke - When selecting character, there’s this green smoke in front of your charcters. While it certainly looks cool, it’s a bit too thick, like trying to view a building 100 meters away while it’s foggy. I think about 30-60% more transparent than it currently is would work quite well.

Check for additional content before pressing start - This is mostly for convience as you could start the game up, then, say, go to the bathroom, be back and ready to play instead of start game, bathroom, press start and wait some more before playing. This should also make it so you can time the “Killer Instinct” with the beat of the music.

Update some characters materials - This is a consistency issue I have, and probably my biggest annoyance. When comparing Jago with TJ, Thunder with Tusk, or Fulgore with ARIA you may notice that there’s a difference with the way their skin looks. Jago, Fulgore and Thunder have more of a shiny look while TJ, ARIA and Tusk are a bit more matte, a bit more real-life like. Since I prefer the way S1 characters look with their materials, I’ll choose mostly from them. Here’s how I would want these to change:

And these are of course excluding upcoming characters such as Gargos.

Overall these things aren’t gameplay related and should hopefully only make the game better if implemented.

Tell me your opinions on these thoughts and please keep 'em friendly as I mean no harm.

EDIT: There was a bit about Combo Assist and Ranked here but after having tried it out a bit it doesn’t seem like an unfair deal and as such it has been removed. It is a bit button-mashy, though.

EDIT 2: I just thought of a new option that could be added to music selection: Character Theme. When chosen, it selects the theme of the character you’re playing without having to scroll through the list over and over. Might be unnecessary if you always play the same character but could be useful if you like to switch it up.

I agree with most of it except for combo assist. I really don’t understand the hate it gets.

Combo Assist & Ranked - I’ve seen some people complain about this and I sort of agree with them. It doesn’t seem fair that players who try their best with normal inputs should get beaten by someone who button mashes which results in a very damaging combo. I don’t think they should be unable to play ranked at all, but should rather be paired up with other combo assist players. Note; I haven’t used Combo Assist, so I’m not sure if it is button mashing or something like “press X, Y, X to do a combo!”

Combo Assist does not, in any way, give you any advantage over your opponent whatsoever. If you’re getting beat by “mashing” that’s on you.

I agree with everything except removing CAM from Ranked.

Training wheels help you learn, but they don’t give you an advantage against other bikes.

I will add that at the match screen it will sometimes freeze while the characters are blinking. Makes Sabrewulf look like he’s pooping.

So fix that too

I wanted to reply to you both in one post but unsure on how to do that. Anyway, I’ve now tried out Combo Assist (should’ve done it before I posted but this has been on my mind for a while and wanted it out of my head), and while I do stand by that it’s button-mashy when using it, when fighting against it, it seems to be just like if they used regular inputs and I’ll therefore remove that part. I shouldn’t speak on behalf of others, especially when I haven’t heard a compelling argument or even used the mode

To @TheMunin, if I may guess, people might hate it 'cause then they might think they lost to a beginner or they simply use it as an easy excuse to losing, similar to “faulty controller”. Who knows

That’s good of you to try it for yourself.
Yes, it’s mashy to use, but that’s the whole point; to be able to perform combos without needing to execute the individual commands. It’s a training tool.

In the end combo assist is a crutch. I wont help in the long run of things. It also limits you in a few ways.

It takes away the focus of learning inputs and offers you the chance of focusing how the game mechanics work.

Check for additional content before pressing start - This is mostly for convience as you could start the game up, then, say, go to the bathroom, be back and ready to play instead of start game, bathroom, press start and wait some more before playing. This should also make it so you can time the “Killer Instinct” with the beat of the m

This!! This soooooooo much!!

Speaking of inconsistency, what the hell is wrong with Maya’s lighting? 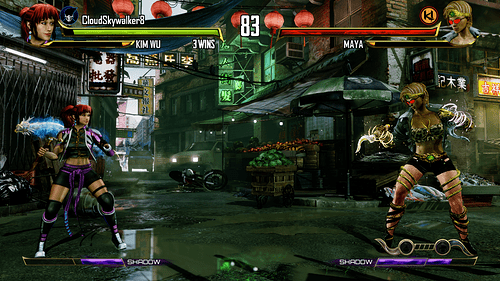 But it would’ve taken someone to implement the 2013 ultra music in addition to coding the 1995 KI danger music to 2013 standard, and then coding the 1995 music for ultra Enders, and that might be intensive not sure-

But I’d be happy with at least bring able to choose a static image of the new stages as we can in practice!

I don’t mind having a still pic of Chinatown brawl as we do ‘it’s a jungle’ stage for practice, as long as I could perfect combos with it in the background!

They are already there, as we see the stage photo when we choose each fight, they could just have them available in practice like the 1994 KI backgrounds!

Am I dreaming too much?