I know this may be considered an off topic post, but with all due respect to Sleep, I think it needs to be a general discussion at least for a little while… just for the exposure… 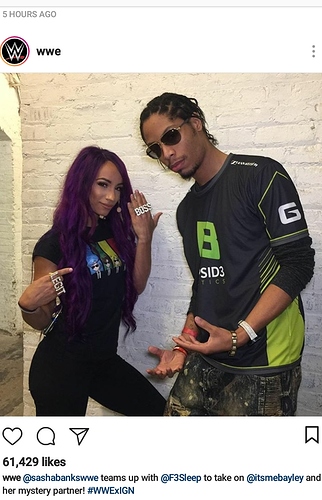 First SonicXHooters and now WWExFGC? What the f*** is going on? (In a funny sense, not anger)

Yeah, I don’t think any of us knew how he landed this lol

Sorry, is he wrestling or are they playing a video game? I’m going to assume it’s a video game since IGN is involved. My guess is his team put it together (what’s F3?), so good for him.

Video game… WWExIGN event… think he played in a finals of MVC: Infinite… also ended up losing but it’s a great experience and great exposure for a gamer… could lead to many things… the WWE is a Goliath of a platform

That’s very cool. Good on Sleep for not marking out too. Being around Sasha and Bayley… I’d have probably marked out lol.

You guys are also thank u for the support. Also i want you guys to know i play much better then what was displayed the production crew was throwing me off plus standing up was strange for me

My favorite is: Playboy x Splatoon