My game is now unplayable because I can’t download the new patch. This has never happened before. My system is plugged directly into the modem through the Ethernet cable. Can anyone explain this? 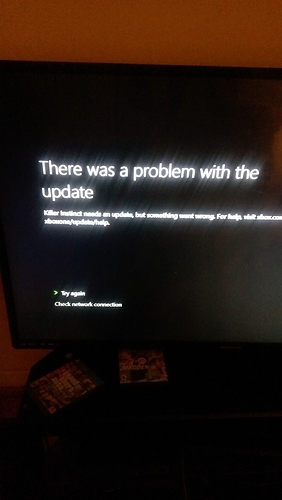 Seriously. We can’t even play the game.

Any of the moderators know what the issue is?

Ok, this is not cool. My daily fix of KI is not possible right now, not even offline. please sort this out with the quickness. Same issue as above

I was just coming on here to see if anyone else was having this problem on Xbox but I guess I’m not alone.

I had the same problem as well…AT FIRST. Don’t know if it’ll work for you guys, but since I barely am on my Xbox, I had to do a System Update app (but ONLY through the Settings Menu since it gave me the same error on the Xbox Menu). Then, I was easily able to download the new patch. I’m good and ready to go now!

Can’t speak for PC players, but Xbox players should make sure if they’re up-to-date.

I posted above you, that my solution was to update my Xbox software through the Settings Menu. I then was able to download 3.6 patch. I’m playing it now.

My system is up to date. No dice even still.

I might have found a solution. Someone told me to look into the Xbox settings and see if the Xbox itself has an update and if so download the update and try the ki update after.

I looked into the setting and found there is an update for the console, I’m downloading it now and I’ll try again and let you all know how it goes

Thanks for mentioning that as well. I had posted the same solution and it worked for me. Updating from the Xbox Menu won’t work for some reason!

Have you checked the update from the Settings app? If so, I’m not sure what else to do to figure your problem out.

My xbox has been up to date. I’m not having any luck whatsoever in updating this new patch. This doesn’t make any sense considering I’m able to play other games. So be it. One thing that peeves me most, is when technology doesn’t work as it is supposed to. Ugh… Gears of War 4 it is…

Oh ok. It’s weird that only a few are able to get it (maybe it’s heavy traffic[?]). I wonder if it’s certain regions not getting it, 'cause I live in EST. Seems that PC players have the same exact problem too.

Did you have any luck too?