I tried googling to see if anyone else noticed or cared, but couldn’t find anything. But Eagle’s size kinda irks me.

So, first, let’s just ignore the heights listed on the KI wikia. Official or not, those stats are irrelevant to this, really. Second, I presume Eagle is supposed to be on the lean, smaller side given the fact he’s an athletic archer. But maybe I’m wrong…maybe he’s supposed to be 6’6" w/ a giant head? Third, this isn’t about height, but rather just respective proportion of Eagle’s body, particularly his head. Although if he were to stand straight up, he’d probably be taller than Thunder, which I don’t believe was the intention. Fourth, I know this isn’t important, but still!

So rather than breakdown each pic one by one, I’ll just summarize it here. If you look at Eagle’s head, it’s enormous compared to his counterparts. Most are female, but the “standard male” Jago’s head is also dwarfed by Eagle’s. I mainly used Mira, but also mixed in Orchid. I also included TJ Combo comparison to Mira, showing a big bulky male’s head in comparison to hers. And his head is bigger than Mira’s as is normal and expected, but not as big as lil ol’ Eagle’s. Oddly enough, Maya seems a bit oversized in proportions also, but it’s not as noticeable. Her head is a bit big tho, but that can happen w/ large ppl, obviously. …if Maya is meant to be large. Both Mira and Maya are listed at 5’11" and Maya dwarfs her, although again, I stress this is NOT about height.

Anyway, if devs could re-size or re-proportion Eagle a bit, that’d be great! I know it’d take a lot of work, possibly even some hit/hurtbox rebalancing lol, so I don’t expect it, but it doesn’t hurt to ask.

Here are the pics: 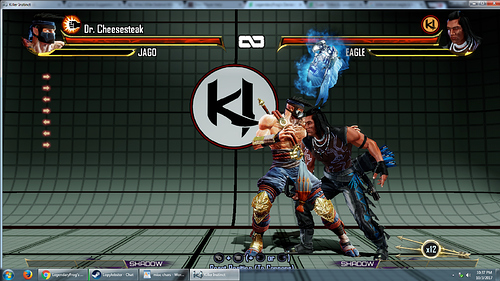 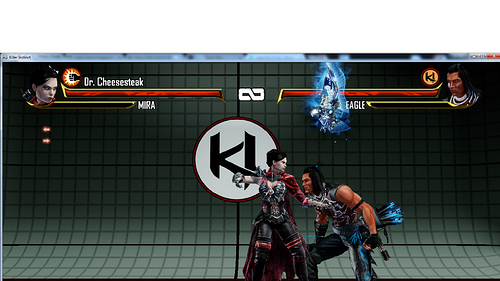 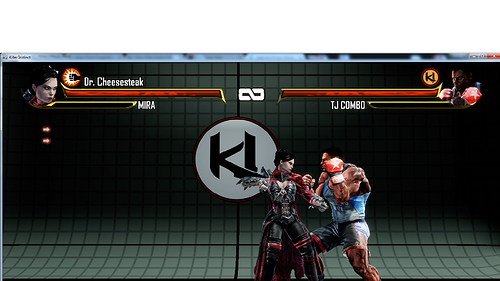 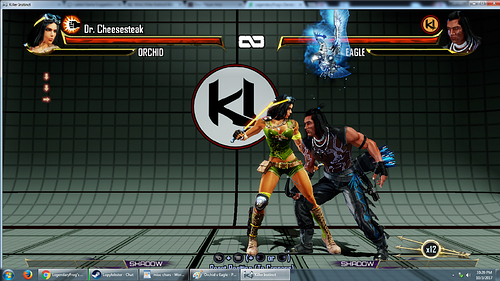 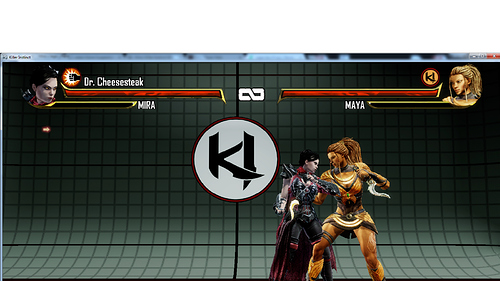 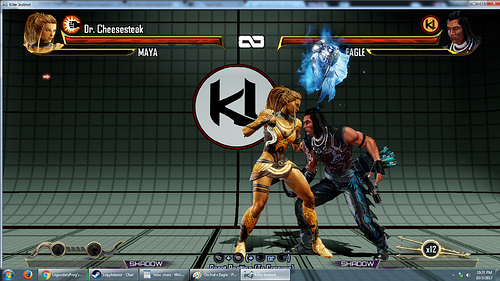 You know, you’re right. I got a big ■■■ head too. But my head doesn’t take up the entire belly of a slim woman. …or maybe it does…

Maya has previously been confirmed to have been designed as a large woman. An Amazon, if you will. 5’11 isn’t exactly massive, but is a decent bit taller than your average adult woman.

Regarding Eagle’s proportions…yeah, he’s got a bit of a melon head. But heads aren’t as small as most people think. Classical proportions have the head at roughly 1/8 of total body length. Eagle’s poor posture exacerbates the “issue” that his head is probably a bit larger than that, but I imagine if you stretched him out you’d find it’s not really that far off.

Bro just let the man have a huge head. He’s sensitive about it

Bro just let the man have a huge head. He’s sensitive about it

@STORM179
Yeah, I actually have no problem w/ Maya, as I figured she was intended to be large. It’s just hers and Mira’s heights are listed the same on the wikia (not sure how official that is) and clearly they aren’t… Maya should be like 6’4", which would still be cool for an Amazonian.

You know, it’s kinda funny. When I play fighting games, I try to come up w/ a formula to deterine who I’ll main since I tend to enjoy and like so many characters based on playstyle, flavor, and personality. I never quite settled on my formula for KI, but Eagle was a candidate. Once I noticed his giant head, he was cut!

I try to come up w/ a formula to deterine who I’ll main since I tend to enjoy and like so many characters based on playstyle, flavor, and personality. I never quite settled on my formula for KI, but Eagle was a candidate. Once I noticed his giant head, he was cut! 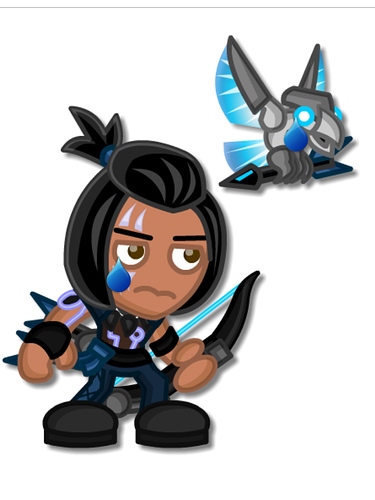 the wikia (not sure how official that is

There are no official wikia sites. By definition a wiki is something anyone can edit at any time. While they’re generally reliable in a lot of cases, if the information is not officially listed it’s usually some dude guessing. Feel free to use wikis but use them wisely.

On the subject of big heads and slim women. I’ve got a nephew who has a head so big that he has to buy shirts a whole size larger than he should so he can get his head through. And my brother has a head about the size of a melon so its not impossible to imagine that if a woman is actually slim (my girl was thin enough in high school I could wrap my fingers around her waist) that a big head could be about as wide as her. 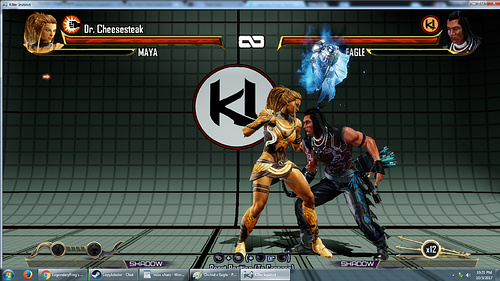 Maya be like “I know it’s not my twin daggers you’re lookin’ at dude, but you will be in a minute, reeeal close, gonna pop that huge head like a zit.” 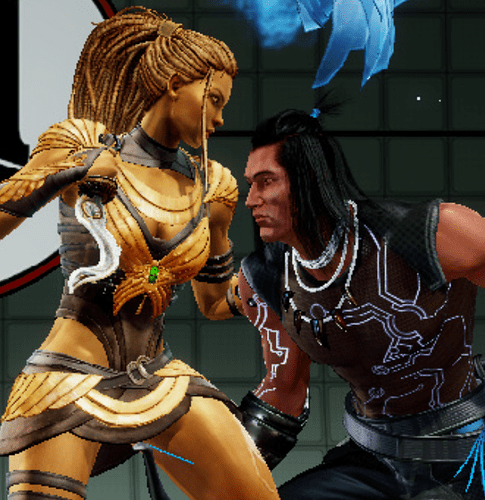 Ahaha, Eagle is a pervert confirmed. “I’ve made my choice.”

Leave him alone! Years captured by ARIA can do stuff to a man

The screen shots with Orchid, Mira and Maya makes this thread uncomfortably hilarious, I’m starting to think “bad posture” is just an excuse for such behaviour.

the wikia (not sure how official that is

There are no official wikia sites. By definition a wiki is something anyone can edit at any time. While they’re generally reliable in a lot of cases, if the information is not officially listed it’s usually some dude guessing. Feel free to use wikis but use them wisely.

well, there do exist official wikias for various other games. Hence why I said I wasn’t sure about KI’s specifically.

Leave him alone! Years captured by ARIA can do stuff to a man

How do his proportions compare to Thunder? They are brothers, after all.

I have never heard of a wiki organized by the developers of a game. Sure, a lot of wikis use data extracted directly from the game and verified through extensive testing (the Dark Souls and Elder Scrolls wikis are very good because of this) but they’re all community run.

https://battlerite.gamepedia.com/index.php?title=Special:AllSites&filter=official there’s a list of official wikias. Including games like Minecraft, Path of Exile, and The Witcher. Not sure of each devs’ involvement, but “Official” is there and I knows devs don’t take that stuff lightly. And I know some are run by the devs themselves.

Anyway, I was just asking how informally official it was, since I was well aware it had no “Official” status. And I put in parenthesis, so don’t take it so much to heart. Maybe IG has that info somewhere, but I aint digging around for it. Anyway, back to Eagle’s giant melonhead?

How do his proportions compare to Thunder? They are brothers, after all.

From what I could tell, if Eagle stood up straight, he could possibly be TALLER than Thunder. Would take someone much better at body metrics than I to measure all that and project it side to side. I was actually thinking of a Thunder and Eagle comparison shot, but just didn’t get around to it.

On the top of almost every single wiki on that list, it says “Written and Maintained by the players”. And at the bottom of each it says “Game content and materials are trademarks and copyrights of their respective publisher and its licensors. All rights reserved. This site is a part of Curse, Inc. and is not affiliated with the game publisher”
They all have legal notice saying they are not officially involved with the developers and are run by members of a community that is moderated by the host site.

On the subject of Eagle’s head. I did some math. I measured out a screenshot of Eagle from my monitor using a tape measure and this is what I found. 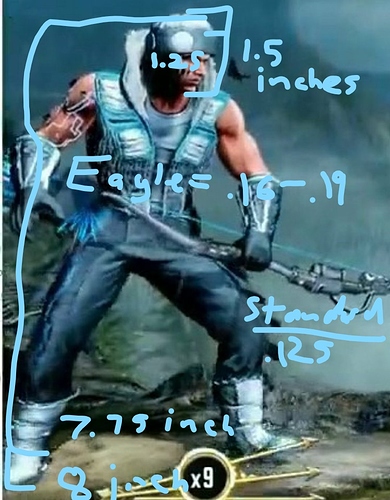 eagle_LI.jpg750×960 169 KB
Depending on where we choose to start our measurement, the image of Eagle on my monitor is between 7.75 and 8 inches tall, and his head is between 1.25 and 1.5 inches tall.
Classical proportions from The Canon (written by Greek sculptor Polykleitos) states that the ideal proportion for the human head is 1/8 of the size of the total body, or .125 in decimals.
Using the data we have here, Eagle’s maximum and minimum head-to-body ratio is between .16 and .19, which is not significantly larger than the base measurement. At worst he may approach 1/5 in hte images we see, but we also need to take into account that his poor posture hides a good deal of his actual height, and thus that his ratio is probably closer to normal proportions (though still above average) if/when he stands up perfectly straight.

We also need to take into account that Eagle is the younger brother in current KI canon, so he may have been somewhat young when he was placed in suspended animation. Depending on his age, his head may be more appropriately proportioned, since the 1/8 rule is for full grown adults.

One more thing: Here is a screenshot of Eagle vs Thunder 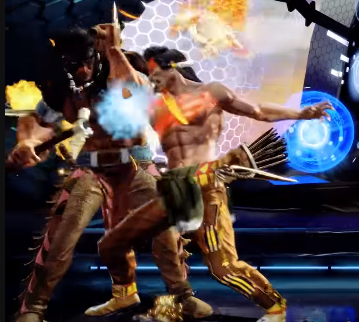 Here, Eagle has a straighter posture, while Thunder is hunched in the blocking position, and we can see that not only is Thunder taller even when hunching and his brother is standing taller, but his head is bigger.