During these missing years, Eyedol forgot to go to the gym

Really not a fan of his belly… The original version was more cut. Compare & Discuss. Eyedol needs to go to the gym! 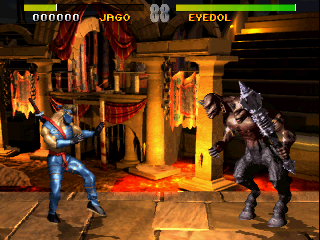 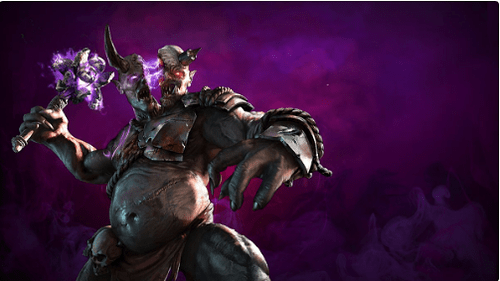 Yeah he got a beer belly just like Birdie on SF5

… but I bet his classic will be slimmer.

I think they went the more hefty route so his two heads wouldn’t look as odd on top of a smaller body.

No. Babydol is fine the way he is. Gargos is fit already. It’s fun to diversify the monsterbosses.
He seems to have lost 2 fingers though. Yet no one mentions these things

I would’ve preferred a more muscular Eyedol but it’s fine, retro should be good. I’m just happy he’s back

Huge strong men often have big guts - and before the days of steroids they almost always did. I think a cut Eyedol would look too similar to Gargos. This is not crazy fat slob like Birdie but he’s a big dude.

He’s fine, first off he’s a corpse. He’s lucky to be in as good a condition as he is.

Second off, he’s based more on out of shape ogre type characters so the belly is fine.

He did but he still looks badass

How do suppose Kan-Ra got his knew about him or got his body? Maybe he read about him in a book or heard of him through the years I suppose and after seeing Gargos he sought him out. Maybe his body was in Limbo. What do you all think

Did you know that the retro has no beer gut?

The beer gut is essential.

What did you expect? He’s been sitting on his a$$ for the past 20 years waiting for the phone to ring so he could go back to work. I tell you, the economy these last few years has been a b****…

I think Kan Ra played KI 1 in the arcade…

I usually stay out of things like this but does every character need to have a six pack? That belly builds character imo.

Too soon bro… too soon…

Dont forget EYEDOL is DEAD…all his blood has drained and settled into his belly…coagulated. Also his belly is bloated a bit from the gas released when parasites and maggots eat dead flesh and then defecate inside the host.

He is damn near perfectly designed for what his story entails.

He is damn near perfectly designed for what his story entails.

Has his story been released?

I thought it was a combination of his ogre/troll/orc like design. Also, I am no expert on the subject but don’t dead bodies bloat a bit? Or is that only if they are found in a river? Lol