New week, new crimson guardian, now is the Exemplar’s turn, here’s the info and how different is compared to the Killer tier version:

What do you think? better? worse? meh, I suck at parrying? only better for health recovering?. 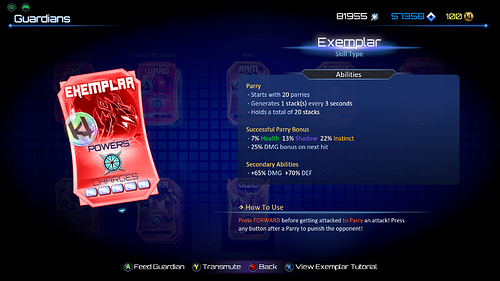 I wish their was a trade in mechanic for extra and disliked Guardians.

Sounds good but I’ll be honest, I was hoping for auto parry.

Can the parries achievement be obtained in multiplayer?

You can “transmute” them in the Guardians menu for Astral Gems and Astral Energy.

Shut up and take my KI Gold!

There is. You can’t swap for guardians but if you transmute your extra and unwanted guardians you get astral energy and gems. Quite a bit too pending g on the rarity.

I have done this before but only because my roster was full. you can do it any time regardless of how full the roster is per guardian?

Yes! You could sell them all if you wanted.

I wish their was a trade in mechanic for extra and disliked Guardians.

LOL yeah I suck at these too. I honestly only use Exemplar guardians to raise my deploy success percentage. It’s probably my most used guardian, yet least used in-game.

Cool! ill trade them all in today. thanks!

Doesn’t seem as good as the Killer?

Well I got him for sake of having the crimson. After I got em I transmuted my perfect killer exemplar for the astral gems and energy, which you get alot out of the perfect killers. But the problem I have with the crimson is the same I’ve always had on the exemplar. It doesn’t reliably deploy. You can be holding forward or double tap forward and sometimes it’ll deploy and others it’ll do nothing. Honestly I think the exemplar isnt worth its salt, not when the owl does a better job at pretty much the same thing, and the watcher is not that bad once you get used to it.