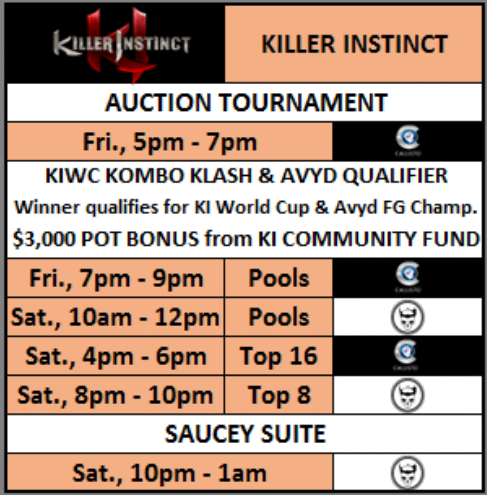 So Top 8 was great, but HOLY CRAP Grand Finals was amazing

Wish I could have seen it live.

I was watching someone cutting someone else’s beard off and then someone else yelling annoyingly in the mic for 10 minutes. I’ll watch the good parts later, I guess.

Ah. That was the Saucy Suite. Which was mostly crappy, as it always is, because they get super drunk and just start shouting. Dave Lang is kind of a jerk once he gets some liquor in him apparently

Yeah, that was probably the best top 8 KI has seen. You definitely have to watch the archive if you missed it, especially grand finals.

It’s a shame that KI has such consistently amazing top 8s and it doesn’t seem to manifest into better offline tournament numbers.

Ever since season 2 launched and the game pace picked up, I don’t think there’s been a bad top 8, even in the early days of TJ/Maya.

Top 8 was terrific.
Ki is such an awesome game, best fg nowdays and maybe one of the best fighter ever.

Where can we see the replay? Spooky doesn’t seem to have an archive.

@STORM179 @Infilament question on the Nicky Sleep match in the archive.
why did it “seem” like Nicky had the advantage on the breaker at 03:47:35? Maybe it’s just me but they didn’t look roughly even. I think Nicky hit the ground faster than Sleep. Am I seeing things?

Fulgore hits the ground first but is probably in recovery until they are roughly even. You can see that by the time he was pressing cr.MK, Aria had already jumped away. I think it’s just a visual trick.

Also, in the corner it will seem “worse” than it really is because there’s no distance created.

(Request: can you edit your post and put that video link in between url tags and say “link here”? Because of the way the forum works, all twitch archives always auto-play whenever you open a thread. Thanks!)

Thanks, I see. It really confused me as to what was going on because Nicky indeed didn’t move. I thought he had the advantage and was maybe trying to bait something, but apparently that was not the case as you pointed out.

the best part was James Goddard @TotalJimkata walking up on stage. Even though he couldn’t say or reveal anything, it was reassuring to hear him talk about tournament support. Was definitely also a highlight for me, personally speaking.

Yeah, even after you hit the ground in those corner situations sometimes you aren’t able to move for a few moments, particularly if the other character hasn’t quite landed yet. As far as I know, you’re pretty much always prevented from dropping a meaty button on someone as they land from a combo breaker, even if it looks like you should be able to do so.

What was that counter breaker on the throw tech later in the match? Sajam explained it but I wasn’t able to grasp what happened

The counter breaker setup you see Nicky and other players use sometimes is wall splat->button->counter breaker. This is a really nasty one because even if the opposing player is just trying to tech the throw, that will register as a light break attempt, and the defender will eat the counter. You don’t see it all the time, but it can be very effective, as a lot of people’s inclination is to throw tech after being wall splatted.

It’s basically like a next level version of that oldie-but-goodie mixup of wall splat->neutral jump, except that if the opponent bites on this one, he’s going to be eating full counter breaker lockout damage.

Does anyone know when the top 8 will be uploaded? I try watching the twitch videos but it goes into MKX and Skull Girls :s