So I’ve been trying to think of a way in which to incorporate a color customization option for characters without impacting the profitability of the existing color pallet for players who choose to purchase colors of their liking rather than playing to unlock them. Then it hit me, the unused boosters feature of this game has so much untapped potential.

So here’s my idea…Only once a player has achieved the maximum level with a respective character (lvl 50), the color booster pack will unlock and become purchasable with KI Gold. Once purchased, the color booster allows you to change the color, hue, and saturation of the outfits and accessories for that particular character to your liking. This would be similar in effect to Soul Calibur’s Create a Soul Mode; however it will be limited to the only the ability of changing the color pallet of that respective character.

I think that this is a win/win solution for both IG and community at large. IG will not lose out on any potential profits because this would only be an option for those that have put in the time and effort to bring their character to the maximum level. It even allows for the potential to further profits because let’s face it, who wouldn’t want the ability to customize their favorite character? I think that just about anyone sharing my sentiments would not mind paying for the option to do so. Lastly, it gives players even more motivation to put in hard work and effort to level up their characters to the max. A custom colored character would be a badge of honor and allows for the freedom of creativity without discrediting the work that the artists put
into each character.

Ideally, I would like the ability to zoom and rotate the characters while in this mode. Of course, there should be a feature to save the style created, but I haven’t figured out exactly how to incorporate this into the current costume/color system. Since both the accessories and core outfits are able to be customized, I suppose that simply assigning this custom pallet to color 8 would allow for the pallet swap regardless of the chosen accessories. This same logic could also be applied to the custom accessories by simply having their own tile just like each of the differently colored accessories that we have in game today. A future innovation could incorporate texture as well. Imagine the ability to change Tj Combo’s T-Shirt or Riptor’s stripes. Again, my inspiration for this comes from Soul Calibur’s Create A Soul Content.

The image below is a concept by @Ravan86 which showcases the core features which the Color Booster would unlock. 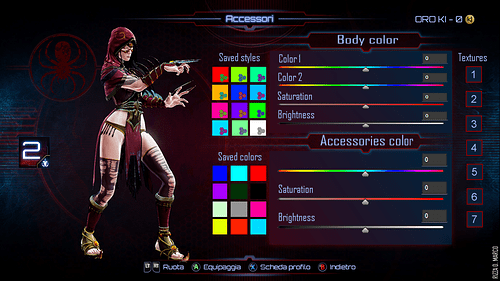 @psykkee also played a huge part in my concept. Please check out his Kolor Instinct App. It will allow you an opportunity to express your creativity until when and if IG introduced an aspect of customization to KI.

[image] Kolor Instinct is a tool that allows you to create your own alternate colors for your favorite KI characters, you can also view the special moves for each character! Platforms: Android & iOS Features: → Easy to use interface. → Nice and clean move list for each characters: command attacks, special moves, shadow moves, openers, linkers and enders. → Announcer Sound Clips. → Live: you can see and watch who is streaming KI. → Alternate Color Editor. You can create as many alternat…

Suggestions and feedback is both welcomed and encouraged. Thoughts?

we can give ideas to the IG, and IG will certainly find a way to make everything perfect

I still don’t think it needs to be this in depth, if they just add more colors for the base skins and add corresponding colors for each accessory kit to match them I’d be happy. Complete custom color control would be highly unlikely due to the amount of work it’d take to implement.

This is a wonderful idea, the only problem is how they can program it in.

Allow full choice of colors by an editor would substantially the chance to meet players with wrestlers from the ever-changing color, the online KI would become so varied in this respect that it would be difficult to meet a Sadira alike.

I like the fact that it would allow for a heightened level of expression in an already beautifully designed game.

I think that this would be a really cool option to offer as a reward for players that can get their characters past a certain point beyond level 50.

I offered an idea of a new mode (I called it Ronin Mode) a while back that opens for each character once they hit level 50, where you get stars on your profile in bronze, silver and gold, but they only show up when you use that character.

Get ten bronze stars, then ten silver, then ten gold, and you get a belt for your profile background. You start with white, then go to yellow, orange, green, blue, purple, brown, red, dark red and finally black. So 300 matches in total to earn your black belt.

Once you get that, another 25 matches get you a bronze KI logo on it, followed by silver for another 25, gold after another 50 matches (taking the total up to 400 in all), then a red and platinum KI logo after 100 more matches (for a total of 500 in all) and you also unlock the color editor.

I don’t know if this is something that people would like or if that’s too many matches, but it seems like a lot of people have hit level 50 with at least a few characters by now. It’d be nice if there was something else to shoot for with those characters.

Plus, I think that a color editor would be a great reward because it’s not something that everyone would HAVE to have or desperately want, but it’d give the hardcore players a way to customize their characters and show off the fact that they accomplished something big, and the belts for the profile would be another way as well.

In my original idea, I had Ronin Mode being both it’s own mode in and of itself, almost like a tower from MK, where each match would have a different condition for victory (nothing crazy like fighting upside down though), but also allow you to earn stars fighting online and in other modes as well so long as you had “Ronin Mode” toggled on for that character. If you wanted to toggle it off, you could.

Sorry for the side story here, my main point is that it could be something worth having in the game as a cool reward provided that they’d be able to program it. Oh and I’d also only want to see the colors for the main color and any trim colors on the clothing and on accessories. I don’t want to fight any Jagos online with green skin lol.

But why not neon pink skin Jago?

I know this thread has been dead for awhile, but since Adam mentioned that a color editor would be possible given they have time to do the tech work for it in his interview, it got me really excited. I would love an official color editor added to the game. I’m sure modders are going to be working on their own masterpieces once KI is released for PC, but it would be awesome to have something in the actual game that allowed for further customization.

But the fact that exclusive colors are being offered for people that buy the figures kind of makes it unlikely that they’ll add this since people could just make the colors themselves.