So, about a month ago, I started sketching up an idea for a character. I wasn’t being too serious about it, but then I started making moves. Then I fleshed out the moves and made them into a proper moveset. With a real IG developer’s touch, this could be a proper character. Basic idea is a character made of soundwaves, as ISAAC stands for:
Interpolating
Soundwave
And
Amplitude
Composite
Not really sure about its background story, but I have mocked up a concept intro and victory animation storyboard. Unlike most character suggestions, however, I have laid out combat traits, instinct, shadow moves, and even another meter and its full functionality. I want the team working on the game to at least see my concept so that I can know whether I am doing something right on character design. If someone took interest, I’d be able to show them my concepts and such. I’m not sure how to do this in a topic post, but if IG or someone close saw it, I’d find a way. Please help me work this up to them, I’ve worked real hard on it, and I’d rather see this than another clone like Shin Hisako, and I bet I’m not the only one.

I could dig and support it. Just one thing. I’d like to see the info on the things you’ve described. Just for something cool to read

Sure. Get ready for some reading though:
ISAAC’s combat trait is called “Turn Up” and is tracked by a meter above the shadow meter, a la Hisako’s vengeance or Aganos’ armor, looking ike a volume gauge. It also has a trait called Rewind, which is next to the Turn Up meter, looking like a basic rewind button. Turn Up works in sections like Fulgore’s Core trait, providing more benefits as you go up. TU has 4 bars and fills with:
-Auto-doubles of increasing intensity, like Jago’s Around the World
-Counter-breakers
-Blocking attacks
-Using its currently unnamed LP+MP+HP ability, which feeds it in small amounts
TU’s meter decays when idle, as well as emptying from:
-Non-physical attacks
-Being knocked down
-Taking damage
-Grabs
1 Bar: +5% knockback distance on all applicable moves
+Standard movement speed
2 Bars: +10% to knockback, rewind is available from this point
+Jump distance increase
+Its command grab attack can now reach fullscreen
3 Bars: +15% knockback
+All of its command grab attacks recapture
+All of its versions of another ability have AA traits
4 Bars (Max): +20% knockback, rewind cooldown time decreased
+Dashes move through projectiles
+A different, close-range ability has increased, but still limited, range
Instinct is called “11” and sets the TU meter to full for the instinct duration, after which it drains back down.
I assume this should suffice while I sketch up more intricate details.

Wow. I actually really like that! Pretty sure he’d get in before my preferred guest character, Ragna the Bloodedge or Naoto Kurogane.

I think we need Chaos from Primal rage. I want to Golden Shower someone.

What do you think of my character, though?

Seems a very momentum based character but at full momentum would be unstopable. There would be no safe way to defend once they had instinct. Assuming rewind does what I think.

Rewind affects one of its abilities that I’m currently calling Frequency Shock, which send out a wave length. When the ability is reactivated at the same attack strength, the wave rebounds and hits again, assuming rewind is filled.

It sounds interesting but can I see a picture of the character?

Not really an artist, I’ve been working with stick figures and squares for diagrams and storyboards.

Well can a screenshot help?

I have been doing the whole thing on notebook paper. I would have posted pictures of the pages, but my handwriting is illegible and nothing can be made out. I could post the pages, but I don’t know how it’ll help.

Well its fine with me but do whatever you can of course I’m not rushing you. 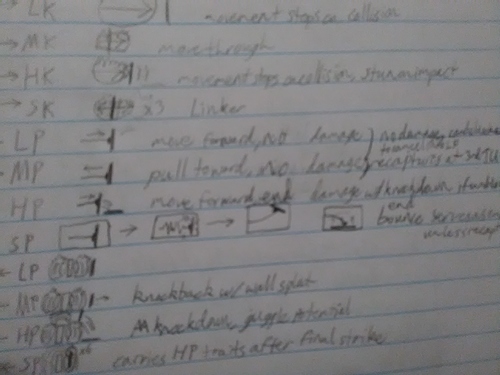 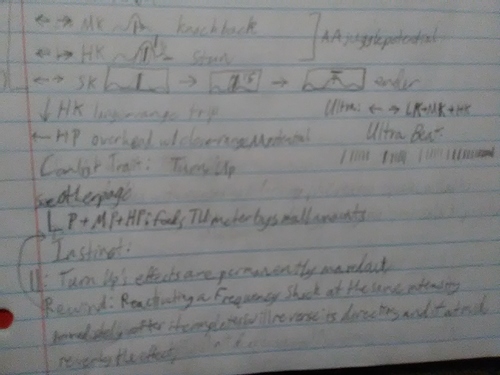 Don’t know if that’ll come through well, but there it is, friend. I generally write quickly because I’m in class, or when I scribble quick notes for myself. Unfortunately, that means my words mean nothing in a situation like this.

That’s a cool idea. The more I hear about this I.S.A.A.C concept, the more interested I am in it.

Like I said, I’m trying to get this up to the devs. If anyone knows how I could do something like that, I’d 'preciate it.