Potential boss for a Killer Instinct sequel. Born from Omen’s lust for power and taste of freedom. Legion the shapeshifter master.

character_bio_hero_omen-2.jpg1866×875 197 KB
Gargos has commited a huge mistake by creating something like a being that almost equals his power. After tasting a short freedom while possessing Jago’s body he grow mad on his disire of eternel freedom.
And so Omen challenges his master and surprisingly he vanquishes the shadow lord.
Before the final blow, Omen hold the body of his fallen creator. Many memories has come to his mind. But such as his master, Omen has no remorse on what he has done. He see the oportunity to absorb that great power and so he does with a reverse demonic dispair all powers from Gargos now flows inside of him. As he watches the body of Gargos vanishing in the astral plane, a strange thing take place through his body, He now behold his body taking different forms. Fighters he already confronted. A scary laugh comes to his mind and he start to lose control of himself. The spooky voice still saying " Omen, once created to corrupt the defenders of the Earth, now we possess you as the wheel of karma turns against your evil dids"

"We are no longer Omen. We are Legion"

I think it would be neat have a boss in the future of KI franchise that does like Ermac and Shang-Tsung.

So…he looks like omen just more…see through? And I’m guessing this boss is the moukjin or charade of KI?

I can imagine something new but for instance i had no idea on how to express this new character.
Or perhaps… 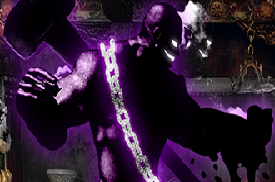 Its a cool idea but I dont like the fact that my fav character being a boss would end up being beaten and then no longer a character that would make the sequel.

Funny how a lot of ppl hate on Omen but when you think about it he got more attention in the KI lore/ Story mode than the original 8 LOL. Not bad for a half asssed bonus character that most think is garbage.