Are you okay with the rank resets? Also do you think they should continue resetting ranks each season?

I personally dislike it, I am finally back to my rank but I wish I wouldn’t have been forced to requalify.

However I do like the option to requalify and feel that is a better alternative then forcing every player to requalify.

I hope in the next season they don’t force a reset and instead just leave it an option.

I like it on the grounds that since the game gets drastically rebalanced each season, it’s fair to assume that you have to relearn matchups all over again. Sure, it sucks for people who were in the lower tiers to now fight pro star level players but that won’t last too terribly long.

What I would like to see though is an indicator on your card for what your highest rank was on a previous season. It’d be a good visual indicator of what progress you’ve made and it’d show your opponent if you’ve improved or not.

I do agree with the reset, and IMO they are a must in each season

I like it because it gave me the opportunity to start fresh with the new characters. I’ll be honest though. I think I’ve been playing S3 characters too much recently.

I think it should happen. Some people find a character that is OP, or has some move that has a bug. Then they use it to climb to the killer rank. Kan Ra comes to mind.

If you are actually good at the game, the. You can get back to where you were at in the first place.

I guess my only thing is between work and a kid it makes it very hard on me each season to get back to Gold and I guess it bothers me because I was there once before.

I guess due to the lack of time if this becomes a thing between seasons I may just quit and let that be that while hoping others may still enjoy the game.

I’d prefer it if rank was based on a per character basis. I actually think from a business perspective it would help IG sell characters to do this. I imagine there is a portion of people who play a lot of ranked who don’t pick up a newly released character due to the fact they don’t want to get stomped in ranked trying to learn the character. But this has been requested before, it must be too much work to implement so they went with a re-qualify option instead. It’s better than nothing, but I will say it’s no secret that players have “Mains” in fighting games and their mains are usually their strongest character so it’s never really made sense to me to have one all encompassing rank for all of your characters.

I just dont understand why i have to play against killers or gold if im bronze, i understand that in the first 10 matches but im bronze now. i should be playing against another bronze or at least silvers but no killers

thats why it doesnt worth a try. Now you see the matter of the off-line modes. KI servers may shutdown someday. This is where the arcades are so important.

I like it on the grounds that since the game gets drastically rebalanced each season, it’s fair to assume that you have to relearn matchups all over again. Sure, it sucks for people who were in the lower tiers to now fight pro star level players but that won’t last too terribly long.

I agree with this. I like it, but yeah, that’s just me.

What I would like to see though is an indicator on your card for what your highest rank was on a previous season. It’d be a good visual indicator of what progress you’ve made and it’d show your opponent if you’ve improved or not.

I would love it if they gave you a counter for how many times you’ve climbed the ladder to Killer. My personal goal is to be able to make it to killer each month with a different character each time, so it would be cool if the game kept track of a stat like that.

Its called a Season, at the end of a season, a new season starts… Its kind of the point of a competitive ladder

I think a longer frequency between resets would be better instead of only 1 month. Speaking of seasons i do hope there will be a fourth one for new characters and to match the calendar year seasons

There’s no real plausible way to selectively get you matches within your rank, KI tries to give you the best possible experience and it can only do so much. A lot of online is dependent on your connection and other people in the region, so if you’re in an area of densely populated KI fans, you WILL run into Golds or Killers more than your own rank. But bear with it for a while, the population keeps growing, its likely you will have someone to beat down soon enough.

As an alternative, there is Exhibition where you could get together with someone from these forums and play an infinite set or whatever pleases you. Unless this is all about Ranked points…

I think the automatic full reset at the start of each full game Season (not monthly Ranked Leagues Season) is a great idea and should be absolutely continued for however many Seasons the game runs for. Look at the way the game changed from S1 into S2, and then from S2 into S3; these are major changes and while you don’t need to COMPLETELY relearn the game there are a lot of new mechanics and changes which I feel make the reset worthwhile.

Having the ability to manually reset yourself monthly is great for those of us who don’t care about chasing the Top 32 but do care about learning multiple characters and want to see individual progress during a monthly period.

Have you slept since the Season 3 launch? Eaten? Urinated?

Then you have not been playing S3 characters too much!

This is why he hasn’t won EVO yet, he’s still taking bathroom breaks. 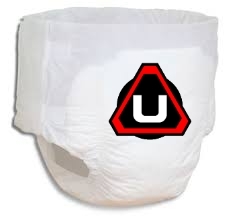 @BHswordsman09 you need to step up your pregame planning dude! Maybe you can get your sponsor’s name on them too for some added funds!

To be clear, this is all just a joke, both Rico and Swordsman would crush me to paste in game!

I always imagined Rico has a “water bottle taped to the leg” kind of guy.

I must buy this diapers!

I could definitely see Riptor wearing that…

they gotta learn one way or another.

We make the best. Join our cause.