this is another I thought about 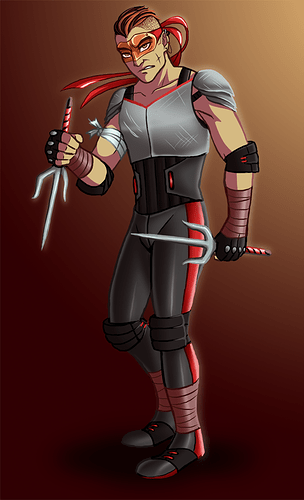 Name: Hiruko Veelo
Age: 20
Height: 6’0
Nationality: Asian-American
Weapons: Sais
Combo Trait (Trickster Devil sais): By mashing any of the punch buttons, he can perform fast combos in the strength and can switch to any strength by pushing a different punch button and can link special moves into it
Style: Projectile Rushdown
Instinct: Raging Devil Sais: this enables him to armor any of his special attacks by pressing the same button twice after performing it and can dash between combos to switch sides and keep up the pressure

Short story: A rouge assassin bent on leaving his mark on the work by destroying all potential threats, starting with ultratech

+P (channels his energy into a sai shaped blast at his opponent, the speed depends on the strength)
Sai twist:

+P (Does an upward twist like uppercut perfect for anti-airing crossups and if the button is held, it slants slightly toward the opponent)
Cescent Moonsault:

+K (Jumps forward slightly with a roll doing a forward flip kick, he goes farther with each strength)
Assassin slash:

+P (Does a slash past his opponent, the strength increases the number of hits)
Corkscrew Kick (Can be done in the Air too):

+PP (Does a damaging 5 hit cash out move that can even juggle)
Shadow Crescent Moonsault:

+KK (Does a 4 hitting forward roll finishing with the final hit being the forward kick, can recapture the opponent)
Shadow Assassin Slash:

+KKK (does 3 sai blasts, follows up with a double roundhouse kick and links it with a 4 hitting assassin slash with a three hitting sai stab, then does a two hit crescent moonsault then does an 8 hit kick flurry following up with a knee then a 7 hitting spiral dive kick, 3 roundhouse kicks and finishes with a two hitting cartwheel and a hard spin kick then ends with a 7 hitting sai Twist) ( 42 hits all together)

Ultra Ender: (He does a sai blast and wall splats the opponent)

+PPP (with a Launching stage ultra, he does three sai stabs and a 6 hitting crescent moonsault) (with a side stage with center positioned, he does a 5 hitting assassin slash with a double roundhouse kick and a finishing hard punch)

IMO: too generic, not enough “wow” factor, no story/connection to KI-verse, and too similar in some ways to Kim Wu…

To be honest, the backstory behind him is more revealing to lead him to being the assassin he is now