So I had something unusual happen this morning…

I was playing online as Eagle, still getting the hang of him(L47), and I ran into this one Shago player. He pretty much curb-stomped me, and then afterwards looked like he was going for the whole drawn-out ultra, which I didn’t really feel like sitting through, so I didn’t. I hit Alt-F4, and moved on to something else. Shortly after that he sends me this series of messages: 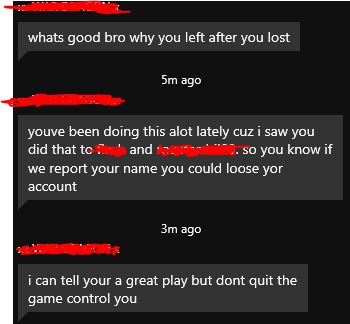 First off, I will admit I am not completely innocent on this, after about the 5th or so hit of his Ultra, I hit Alt-F4, though it’s probably the first time in a couple of months. But to threaten someone with loss of their account over not sitting through them rubbing it in? Really??

Anyway, I was curious about this in regards to A: Can they actually do this to me? And B: What can I do (aside from not quitting, that’s obvious) to keep this BS from happening?

One, reporting accounts requires a lot of people reporting for any action to be taken.

Two, report this clown for threatening you or unsportsmanlike conduct or whatever you’d like to throw it under. This idiot wants to report you and threaten your tag because you don’t want to sit through his e-peen stroking session. F*** him.

It’s not a bannable offense. Action could be taken if you’re a frequent quitter or something, but that would take a lot of people hitting you constantly for the same offense, and for another, the punishment tends to fit the offense on Xbox live, which even if this is the pc version, it’s still operating on the same rules.

If you are a frequent quitter, they may issue a temporary quit ban in some games or at the very least hit you with a lowered player rating on your profile. But having your account banned for excessive quitting? No. Losing your account requires way bigger offenses, like modding your game data for an advantage and ruining the online experience, exploiting known issues with a game to achieve the same effects (like the RZR Infiltration bot on SFV), harassing players online excessively, the big stuff. This guy is trying to upset you in a way he makes you think he has leverage.

Even being reported isn’t enough, the Xbox team isn’t automated and those complaints don’t just get sent to some machine where action is taken with cold calculation. The complaints received are verified with metric data and proof of offense. They are fully aware the system can be misused by some people in an attempt to get others in trouble for things they didn’t do. Even if you do RQ a bit, losing your account over it is a huge stretch. We’ve all probably RQ’ed in some game or another.

Think nothing of it. If you want, you could submit feedback on him. In this case, his communications could have become an issue, to which they may revoke his messaging privileges, which they can do that. They have voice bans for people who misuse mic and talking privileges, and sometimes you’ll see gamertags with the words “code of conduct” on their profile bio and other info for putting messages in those fields they shouldn’t. But I wouldn’t worry in your case. He’s salty cause he can’t rub it in.

Yeah, I guess he kinda took me by surprise. I’ve never had anyone threaten like that before, especially for being a sore winner.

Anyway, I reported him for threatening my account. I didn’t want to say anything in the OP about that, but it does seem to me like threatening to get someone banned would be more of a CoC violation than Alt-F4-ing an Ultra. Irony?

BTW, in case anyone was wondering, here’s my rep sheet…finally found it online (tried to find it in the Xb1 dashboard, didn’t see it anywhere) : 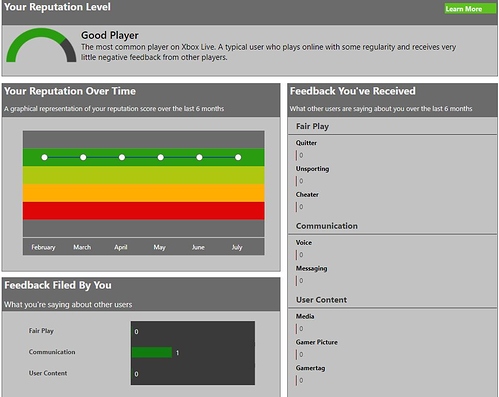 As a Sadira main, I get reported just for using Sadira.

My brother was told by some kid that he had his IP address after I tried to convince him to play again so I could personally help teach him a lesson, lol. I tried to get a rematch with myself playing, but instead the kid sent pharagraph messages before I gave up and he threaten something something about obtaining my IP address and all this nonsense.

I was honestly hoping he knew his stuff and could actually get my internet credentials and not attempting to do it via a client based on a video someone posted on YouTube.

Anyway, as I much expected, nothing happened and I moved on. Let people say as they will, until something happens thats when you should worry. Otherwise, let them hack, ban or whatever they want to do since their uncle’s cousin’s best friend’s niece works at Microsoft or something.

Side note: Where’d you get the rep sheet from?

Lol, I’ve been called a cheater in the last six months. Probably someone saying I kept getting life back as Jago

@SoSRaGnArOk @oTigerSpirit this is my graph. Lol I got Unsporting Behavior from playing Random Select Wulf and Glacius. I got the messaging ones because I got into an argument with a dood who bagged me in games 1 and 2 of a ranked set and when I bagged him I got double reported (LOL). Idk why GT is on there, I’m named after a Tekken 6 staff ghost. 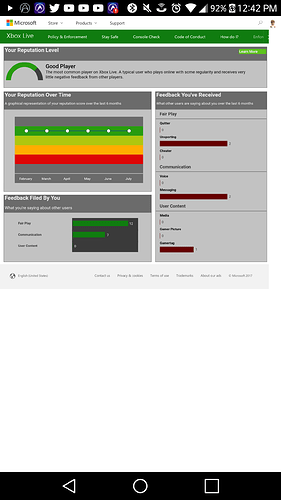 As a Sadira main, I get reported just for using Sadira.

True, it has nothing to do with anything else that using Sadira and beating them. Which is sad from their part to act like that.
This also happened in Gears of War 3 in 360. When I was new and didn’t get kills at all I was 100% prefered player. The moment I got better and got MVPs I was 50% avoided, withouth executing, insulting or anything. “unsporting” was the most voted (again, I hardly even executed people!!) and even got a “disturbing voice” when I don’t even speak in chat. Geez…

She is =) …Ok, she was…I just don’t like when ppl t…g me with her u_u . I find it more offensive that other characters don’t know why, lol. Maybe is her personality

Lol, I’ve been called a cheater in the last six months. Probably someone saying I kept getting life back as Jago

You cheater! stop wind kicking people on the internet! / kappa

nonono, this is totally wrong! Oh, maybe because there’s no more region lock in the new Gears of War 4. The truth is brazilians were extremelly salty people in Gears of War 3

I’m liking my rep in the end. Maybe I’m not playing online enough…

I block only when something really bothers me. I report people: insulting via message/ trolling the whole match / people AFK that cost winable matches (I try to make sure they are grinding and not staying there because an emergency).

Don’t think you are going to be banned for that. In understand your concern, once I received a threath of report but verything turn out ok. The real problem is when many persons report you. Those are the cases they are more focused on.

But him sending a message for you quitting the ultra?There was no need…Multiple ultras are time consuming and there’s nothing great to see.
I have people rage quitted on me because I left one ultra running for a phone call I got and also ragequits in the first ultra hits I couldn’t cancel in time (the ultra ender input fails sometimes -___- )
I haven’t ragequited in a single triple ultra yet, and also was teaba…eg a lot. Still don’t know why…Oh yes! the brazilian player…Some of them are so ‘lovely’…(not talking about lemon and other visible players, they are cool! ) it must be an Argentina / Brazil rivalry maybe…

You are not going to loose your account! Not for a disconnect. there is no proof or how you disconnected. You could have had a ISP drop, a knock at the door, a child on fire, a rage quit, an unpaid cable bill… dont sweat it.

Just dont call them racial slurs, threaten to kill them, or sexual comments and you will be fine. lol

Alt+F4 would be worth it for sure to save time on ultras if not for the stupid checking for DLC check at the launch of the game which pretty much nullifies any of the time you saved by not sitting through the ultra.

I still cant find the detailed page? Once on the main page and signed in, which link do you click next?
My “reputation” box isnt clickable. It just shows the GREEN arch and thats it.

Odd…it’s clickable for me, after signing in of course…but whatever the case it’s through that link.

Well there’s the fact there’s a TON of DLC for KI. Sooo… Checking for DLC taking as long as it does is kinda understandable.

Hmmm… thats what i figured but mine isnt Dark, its light grey and you can not click it.
thats odd…mine must be so full of offenses they dont want me to see it LOL

I can click on the first tab that shows where I was suspended twice in the last 3 years…but none of the stuff you guys are showing int eh pics.

I think there’s a specific link. Lemme look for it dood

Thats the link I used.

Damn! i had to hand type in “/home/reputation” as the link isnt available for me.

But anyways Im a cheater and unsporting! LOL