Which of these two scifi-horror creature icons do you prefer? Which one do you like better or like the most?

As for me I hands-down prefer the Predator aka the Yautja over the Alien aka the Xenomorph for a number of reasons including the Predator’s overall design looking MUCH MORE cooler, awesome, and badass as well as stylized while the Alien’s overall design now looks a bit too simplistic to me and in my opinion too

I honestly think the predators are dicks, they’re always hunting something for sport and using the deadliest life form in the galaxy as trialfor their children until ■■■■ gets out of control and they nuke the place.

Well the Predators ARE hunters after all. In fact, their VERY original name, Yautja, in their native tongue/language literally means just that: “Hunters”.

Also the Predators (most of them, at least) are actually a REALLY honorable alien race. As a matter of fact, they happened to have a code of honor as well as followed a code of conduct whenever they go out hunting anywhere in the universe.

Predator!, because of their codes and you can get a chance of connecting. And their design is amazing (reptilian-crab features?)

I won’t say alien’s not good,seems pretty complex and put a standard about alien’s designs. I like the queen above the normal ones, but I hate parasites and that’s what their are.

Although I love Alien, Predator has lot of stuff I like:

So overall AND in other words the Predator, yes?

The parasites, you are referring to the Chestbursters as well as the Facehuggers in the Alien series, yes?

I honestly think the predators are dicks

Well, the aliens actually are dicks though. Their head shape is literally a penis.

@MandrillManiac has a lot to say here

Hmmm I dunno. they don’t remind me of ■■■■ (maybe it’s the teeth and the teeth tongue). Their head reminds me of beans.

@MandrillManiac has a lot to say here

Alien wins by default in a fight.

But predator wins in the battle for hot water 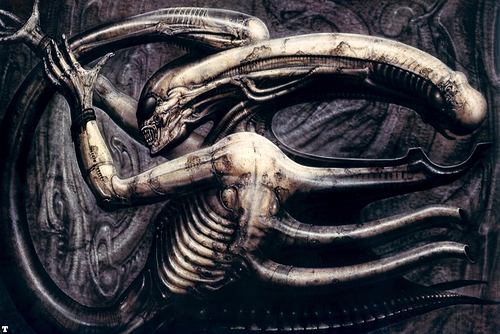 I can see why they changed it.

Yep, the literal dickheads and other knobby bits on the xenomorphs were part of a motif that Geiger often used in his horror art: Rape, violation, and emasculation. The fact that this alien race could be birthed from a male, and the fact that it used its tongue and tail to penetrate victims to death were all part of his subtle edginess.
It’s also why the opening on the facehugger looks vaginal, and why the aliens leave slime everywhere.
He really liked his scary lewdness, Mr Geiger.

If I had to choose between Alien and Predator, I’m kinda leaning predator. Sure the aliens are awesome from a design point, and the films took scifi horror to the next level. I just liked the first Predator film more than the Alien films.

Yep, I can clearly see that now. By AND from the one and only H.R. Geiger, in fact

I chose pred for all the reasons already listed, but you can’t deny a xeno’s remorselessness. They even kill the children!