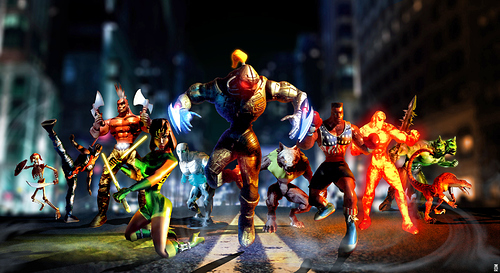 if only the new KI could have decent costumes retro …

i wish retro Fulgore was exactly like in this picture.

The only retro I’m really disappointed with is Thunder.

The only retro I’m really disappointed with is Thunder.

Indeed that is the only one that’s really bad.
Especially since most of the retro are like this due to their bone riggs.

Overall am proud to be a bona-fide 90s kid

Despite the overall poor quality of the models back then (we didn’t know any better), that’s still an awesome pic. Thanks for sharing, @Ravan86!

so awesome and great all at once.

Nostalgia oh you can be one heck of a lady.

I kinda think this should of been about the pic instead of retros but I’ll be honest, I thought Cinder’s, Spinal’s and Glacius’ were the best ones.

They could have done the right thing and givin him both of his retro looks.

What do you mean “Didn’t know any better”?

Back then, many people (myself included) were so drawn in by how the graphics looked, we would say that it looked absolutely “real” compared to other, not-so-graphical video games, even though it’s obviously nowhere near close to actually being real or even to what we have in terms of graphics today.

What do you mean “Didn’t know any better”?

What he’s saying is back then 3D models of the past were not so good compared to today. But really it has more to do with the fact that 3D was just starting to become a big thing, so it’s excusable you will find seirously weird inaccuracies. Like super thin waists on guys.

You are a great artist, maybe you can create an image of the retros in your perspective and post a similar photo like the one you did here, like a throwback! Nah, you’re probably busy, it probably gets annoying when you get all these suggestions.